Mysteries of the East Summary 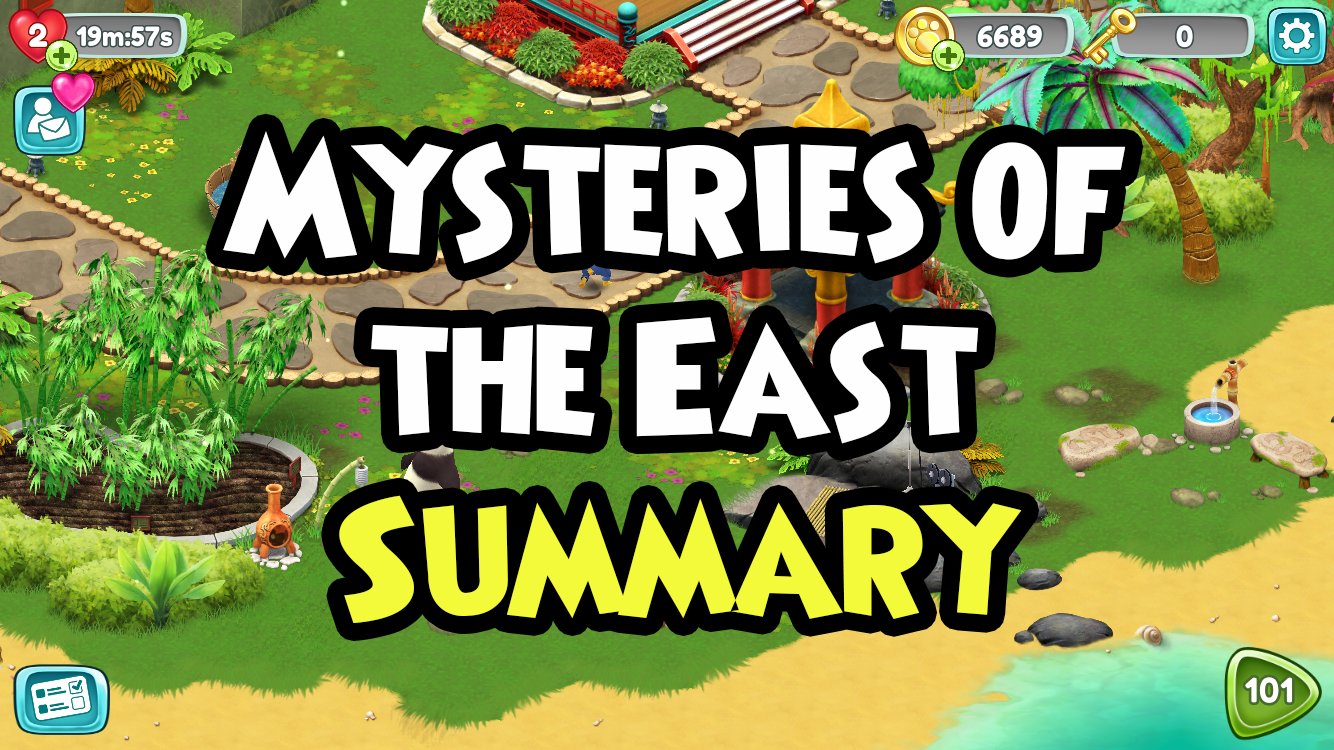 Phew! I’m happy to announce that I’ve completed the current Animal Cove storyline. That’s 100 levels worth of match-3 puzzles! While I eagerly await the next update, I wanted to summarize what’s happened since my last big Animal Cove post. After all, I find the story pretty interesting.

If you haven’t already, please read this post to get caught up on what’s happened so far. This post will pick up where that one left off.

*ANIMAL COVE STORY SPOILERS ARE BELOW*

Last you left off, you and Winston decided to travel to the “Mysteries of the East” portion of the island while Dez stayed behind to handle communications. When you arrive, you find an old info booth. Winston thinks it may hold a key to the island’s history. Unfortunately, it’s not in the best shape, but Harper is able to restore it to its former glory. 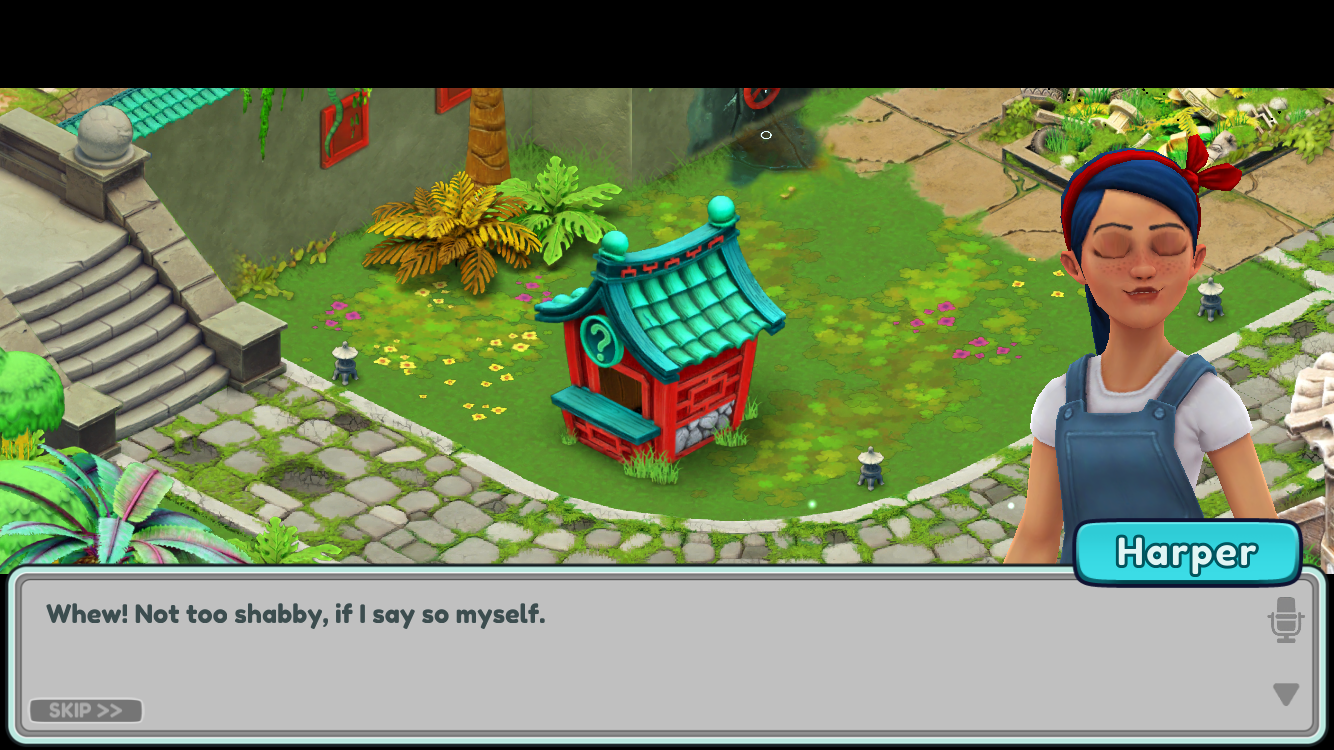 With that out of the way, you’re ready to meet your newest animal – Amanda the Panda! Amanda is a very enthusiastic singer/songwriter … but let’s just say that she isn’t the sharpest tool in the shed. After you start renovating the area and find Amanda a place to stay, your attention turns to her musical needs. As a budding musician, Amanda requires an instrument, and she has her heart set on a ukelele. Luckily, Dez is able to order one along with a mini recording studio. Amanda seems content with her new home, but things are about to get a little messy.

Elias calls you with interesting news. An inspector from the Department of Animal Safety and Health will be dropping by the island to make sure everything is up to code. Well, “code” is subjective when you’re dealing with talking animals who dress up and walk on two legs. Winston is aware of this, and urges Dez and Amanda to act like “regular animals.” Soon after, Inspector Kemp arrives on the island. He’s not the friendliest fellow, and quickly describes your “sanctuary” as highly irregular. He wants to shut you down for not having an exotic animal permit, a lack of bamboo (which he claims is starving the panda), and a cracked wall (a mold hazard). However, although he WANTS to shut you down, he’s unable to without a required follow-up appointment. Looks like you have a lot of work ahead of you. 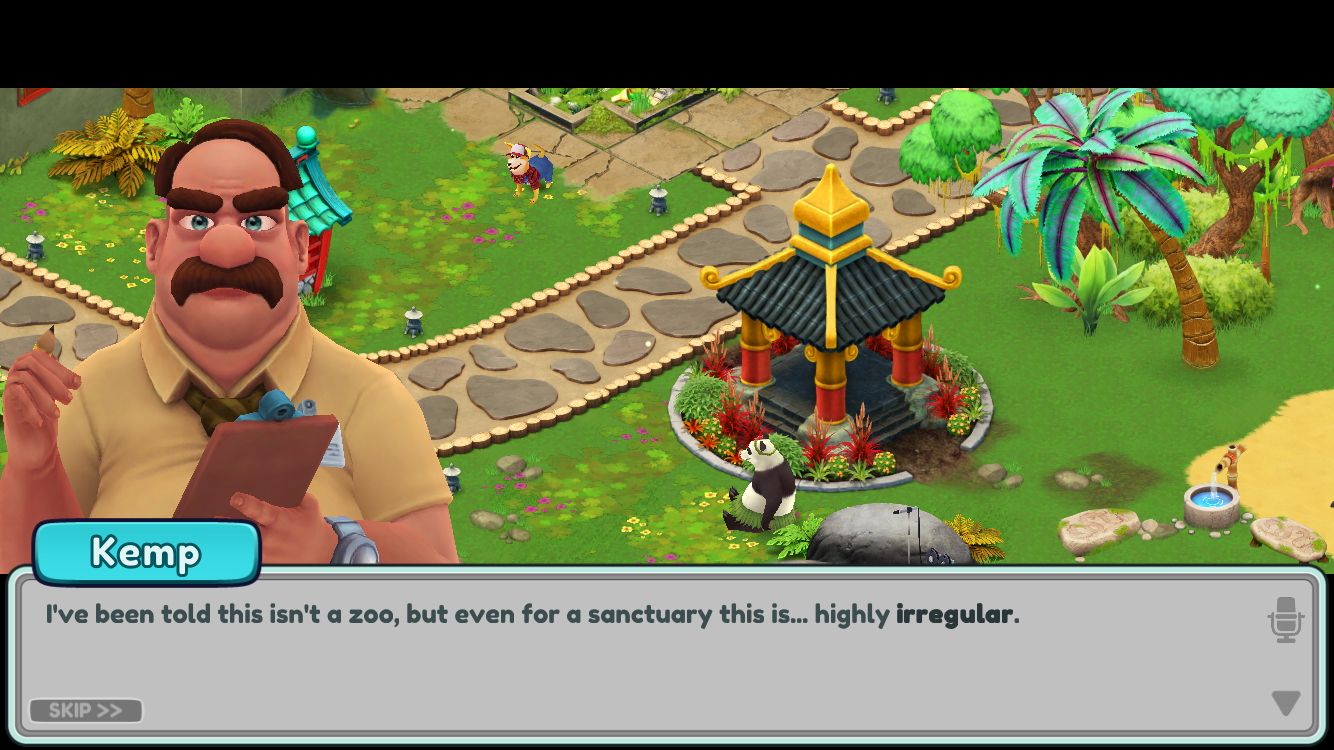 You decide to call Elias to inform him of this troubling development, but it seems he has something else on his mind. While base jumping in the Himalayas, Elias stumbled upon a very special tiger that he wants to give a better home. Oh, and he’s already on his way! Winston determines that preparing for the en-route tiger takes precedence over the inspector’s repairs, but you’ll have to move quickly. Sadly, things don’t seem to be going your way. In an attempt to turn an old fountain into a pool for the new tiger, faulty piping causes the restored info booth to explode. In the wreckage, Harper finds an old journal. Well, what’s left of an old journal. It’s in bad shape, but Dez offers to try and piece it back together. 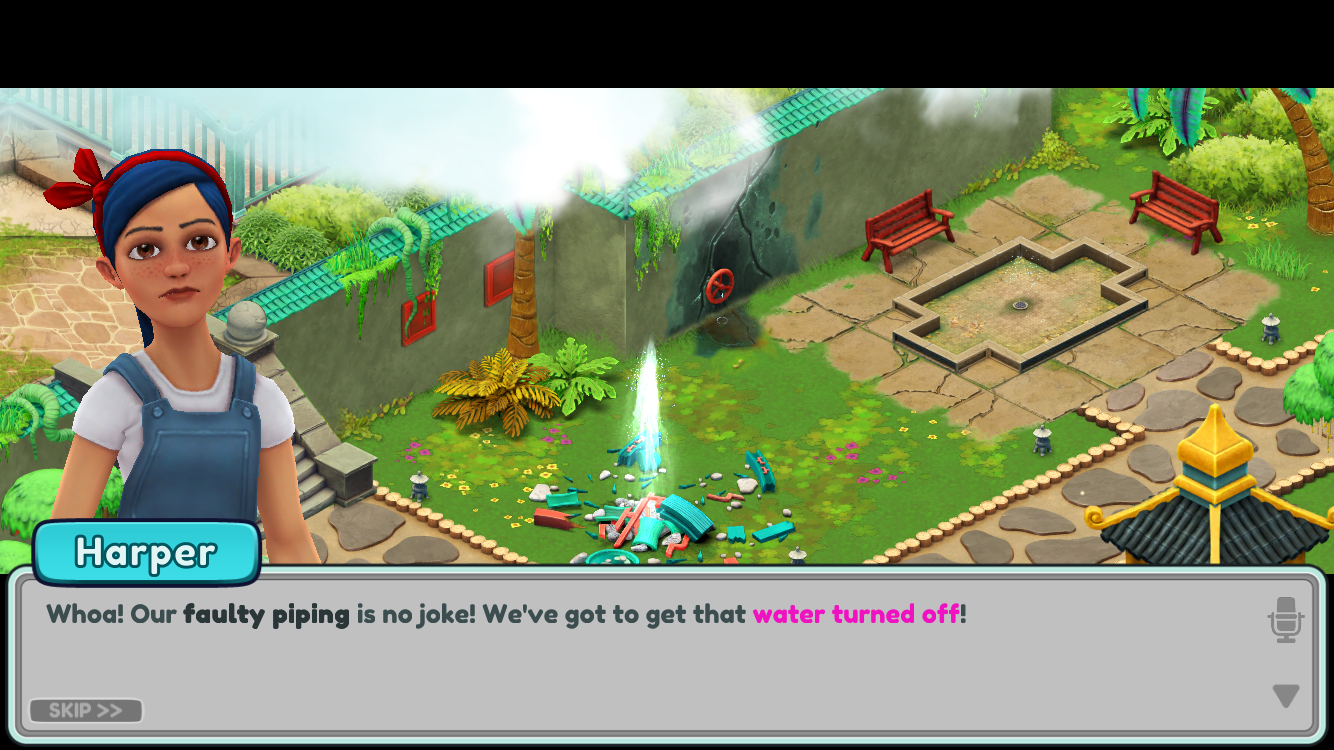 In the meantime, you light a signal flare which brings the new tiger to the island. The tiger introduces himself as Adonis, and well … he’s not exactly a “team player.” In fact, Adonis’s big ego puts him at odds with Amanda. Trying to be friendly with the island’s newest inhabitant, Amanda nicknames Adonis “Donny” and sings him a welcome song. Adonis, sick of the noise and unwilling to go by anything but “Adonis,” yells at Amanda in frustration. With Amanda visibly upset and Adonis at a breaking point, Winston becomes worried. Not having them get along won’t look good when the inspector comes back. 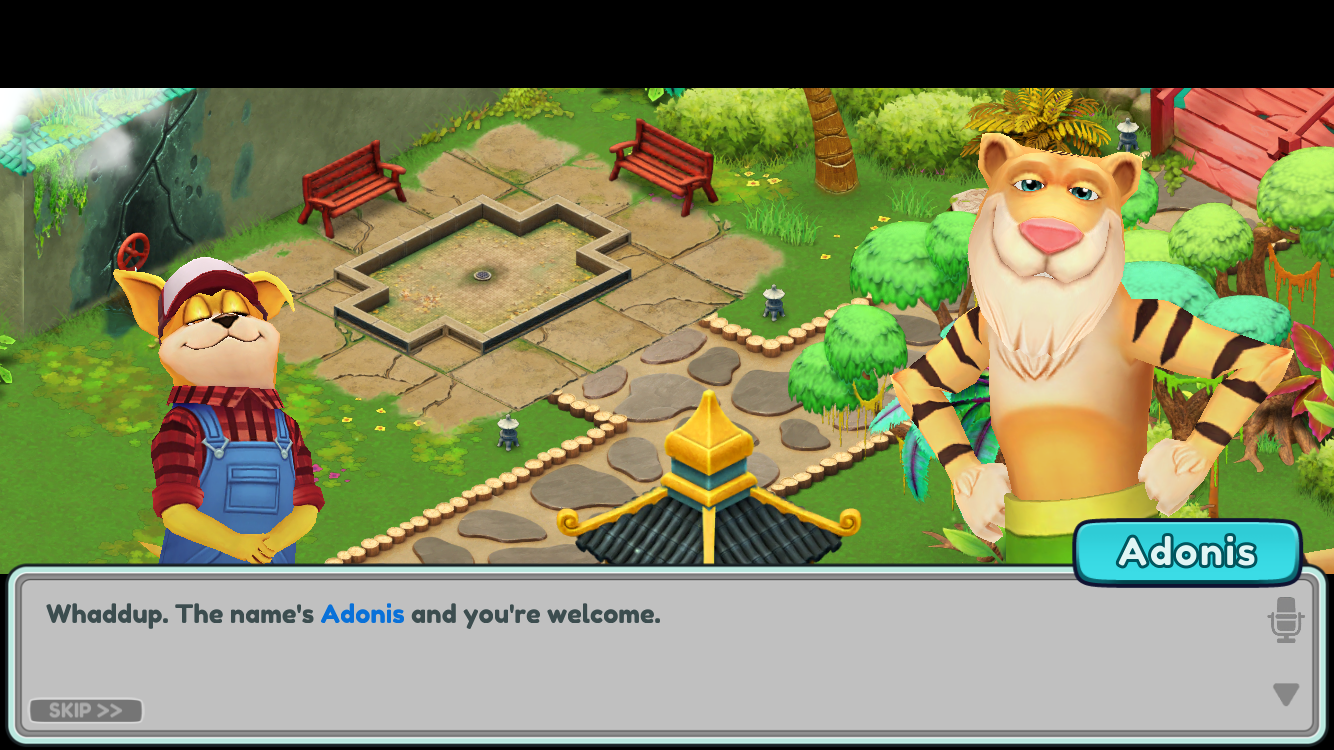 After pleasing Adonis with a pool, a deck, and some weights, your attention turns back to Amanda. Winston encourages her to give Adonis some space and to work on a new song. While she’s doing that, you and Winston are going to work on the island repairs for the inspector. First, you call Elias about the exotic animal license. It turns out that he accidentally ordered a “military-grade exoskeleton” license instead of an exotic animal one. He assures you that the correct license will be there on time though. You then fix the island’s faulty piping, cracked wall, and plant some bamboo seeds. It looks like things are finally starting to look up. To top it all off, Amanda makes amends with Adonis after she sings him a personalized song and paints a mural behind his deck.  Just in time too – the inspector is on his way! 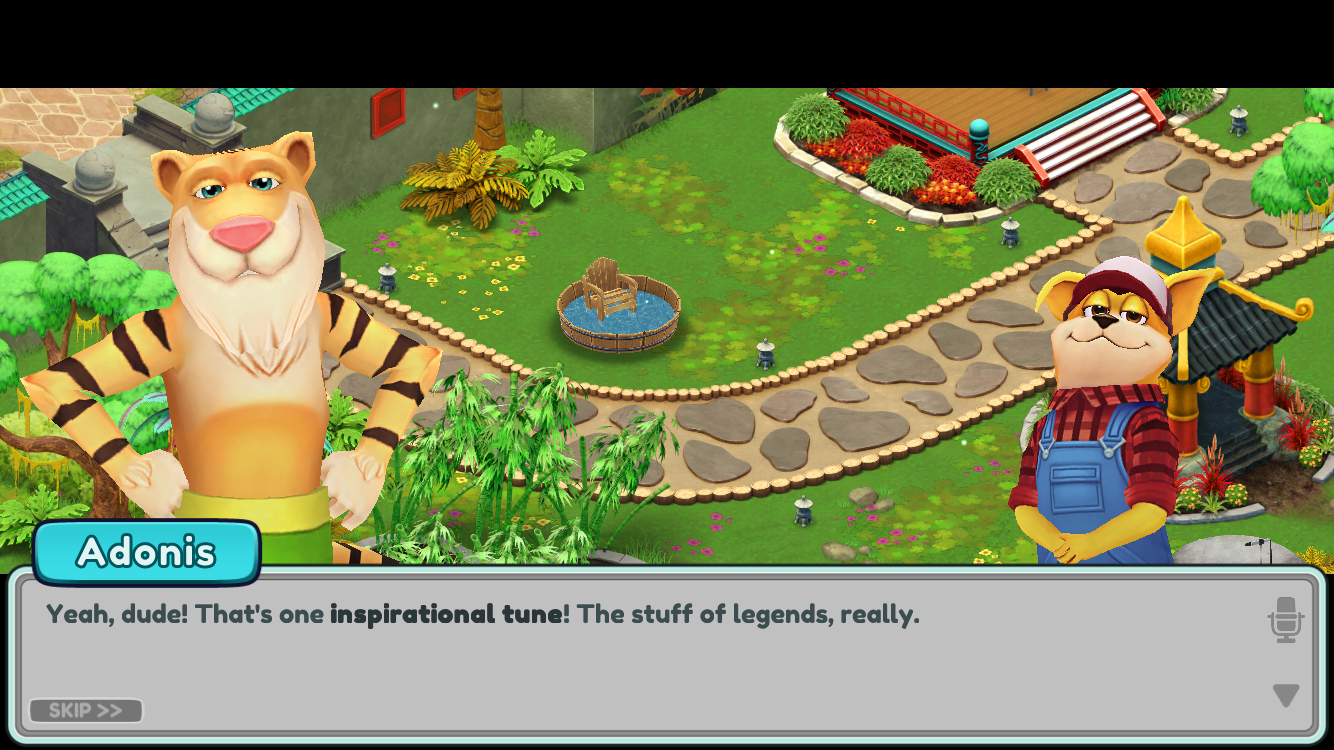 Upon his return, Inspector Kemp immediately tries to shut you down when he realizes you still haven’t obtained an exotic animal license. Luckily, Elias has impeccable timing and drops one down to the island just in time. Annoyed that everything now seems up to code, Inspector Kemp vows to eventually figure out what you’re really up to. While you, Winston, Amanda, and Adonis are happy he’s gone, you can’t help but think that this little feud isn’t over. 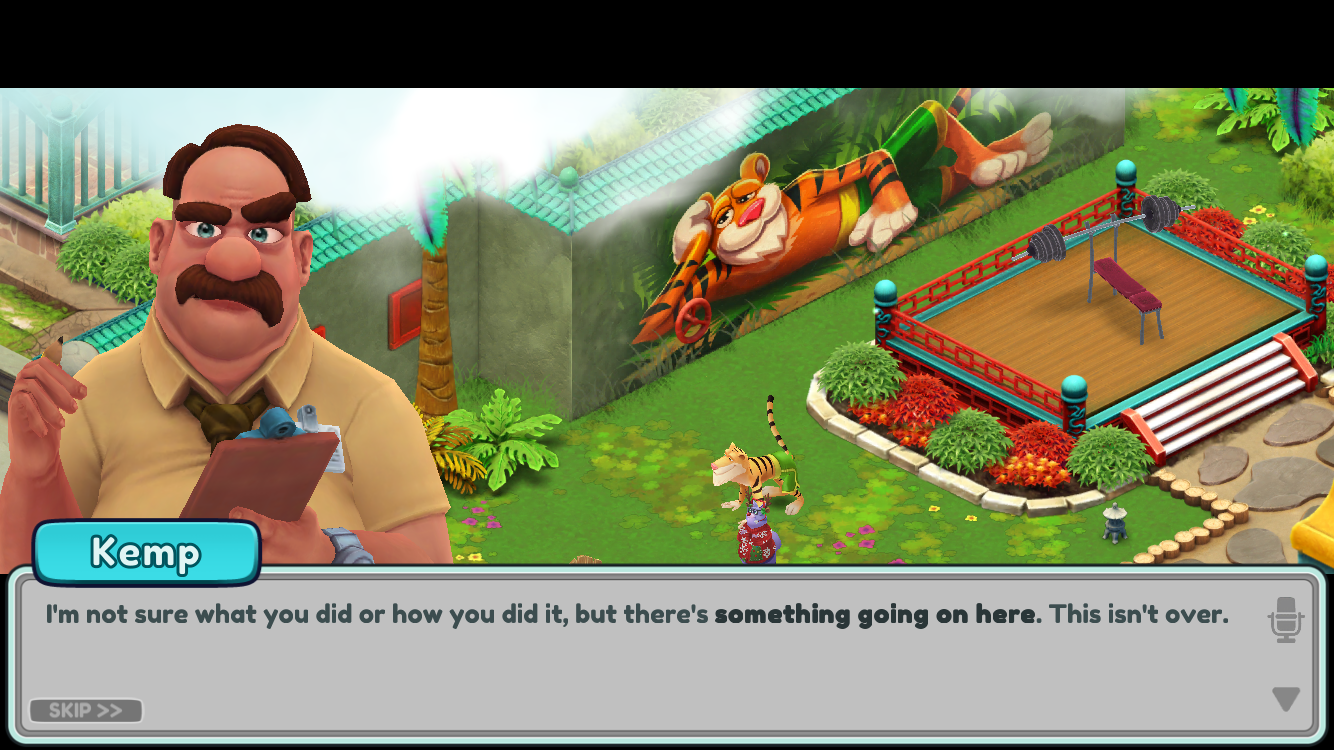 Shortly after the inspector’s visit, Dez announces that he’s successfully pieced together the old journal. It apparently belonged to the former groundskeeper and reads as follows:

“Good news — I found my chess set today! I was tending the plants around the pond when I saw it, hidden beneath the tall reeds. It looked like someone had been playing it, but left mid-game. Here’s the odd thing: the mud there did not have a single footprint! I’m just glad to have it back. It’s locked up safe and sound now. But ever since, something strange is going on. It’s the cranes by the pond — the way they look at me. It’s almost like they’re angry. It even looks like they’re talking to each other about me! But no time for worrying about that now. I have so much work to do with the opening ceremony for the park tomorrow. I can’t wait to see the big trick we’ve been told about! 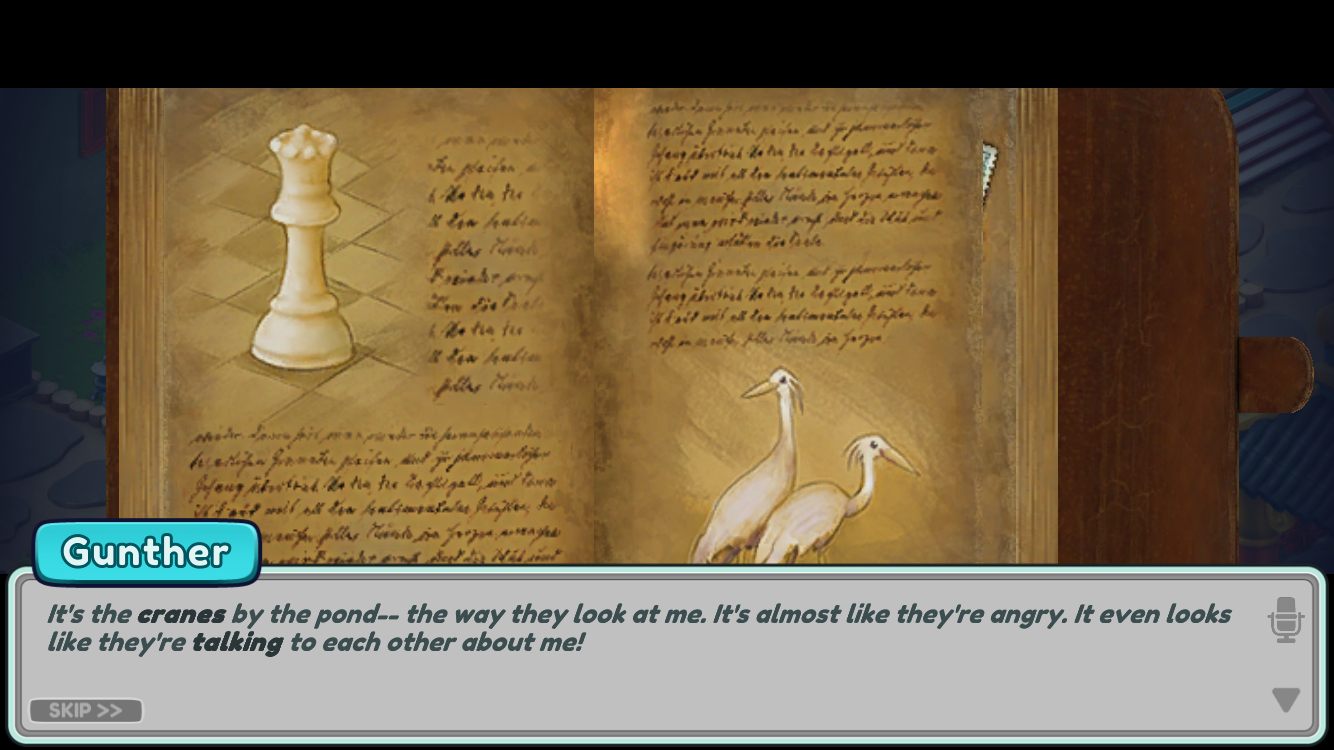 Winston notices that the last few pages are missing, and is surprised that the park dates all the way back to 1915. Even more curious though, is that it seems like special animals were on the island well before you even arrived. Thinking that this is big news, you decide to call Elias. As usual though, Elias is more concerned with other things. He’s apparently found an alligator that wants to be a chef and is sending him your way now. Not knowing where to put him, you decide to consult the park map. It looks as though there is a “Food Court” just beyond the park entrance … a perfect place for an aspiring chef! When Dez discovers that you’re thinking about venturing further into the park, he’s hesitant and urges you to take it slow. Finding his behavior odd, Winston asks Dez if there’s anything he’d like to share. Dez immediately changes the subject and says he has to go get back to his game. Weird … 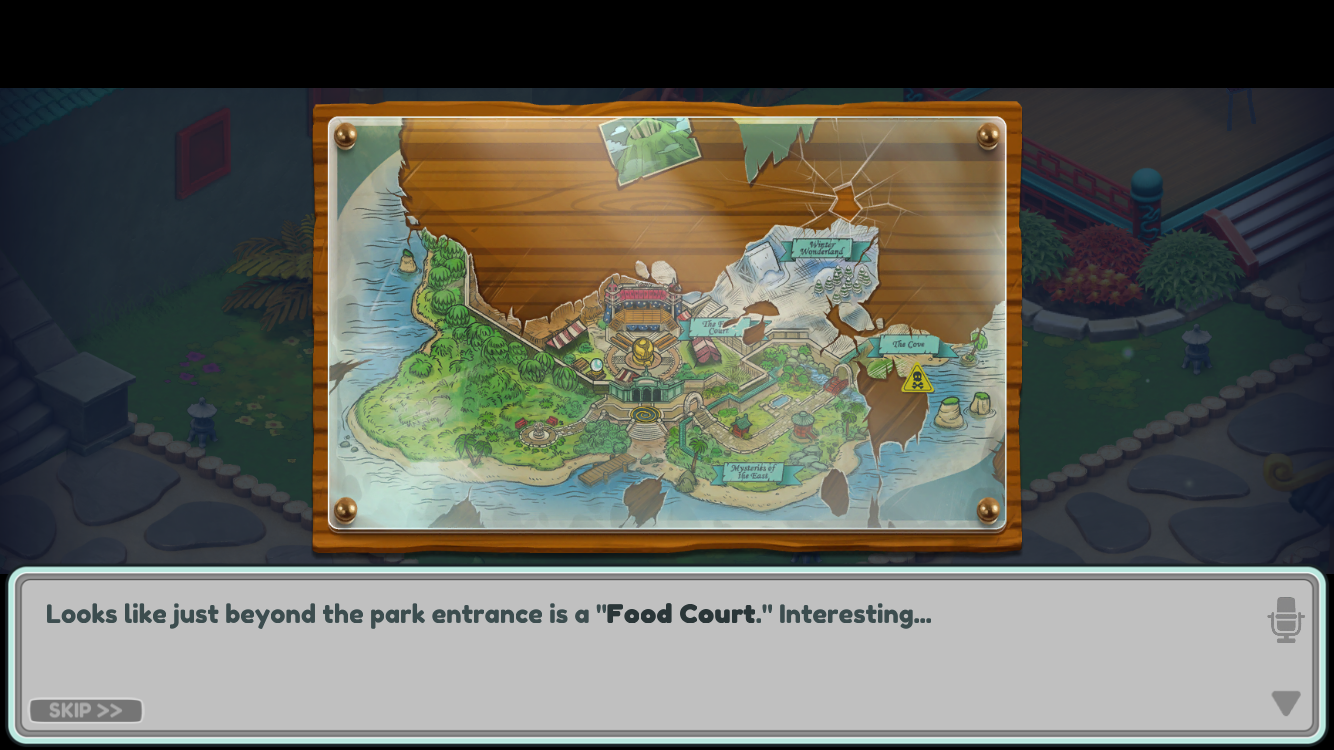 Off to the Food Court!