Get Jiggy: The Mobile Game that Will Never Be 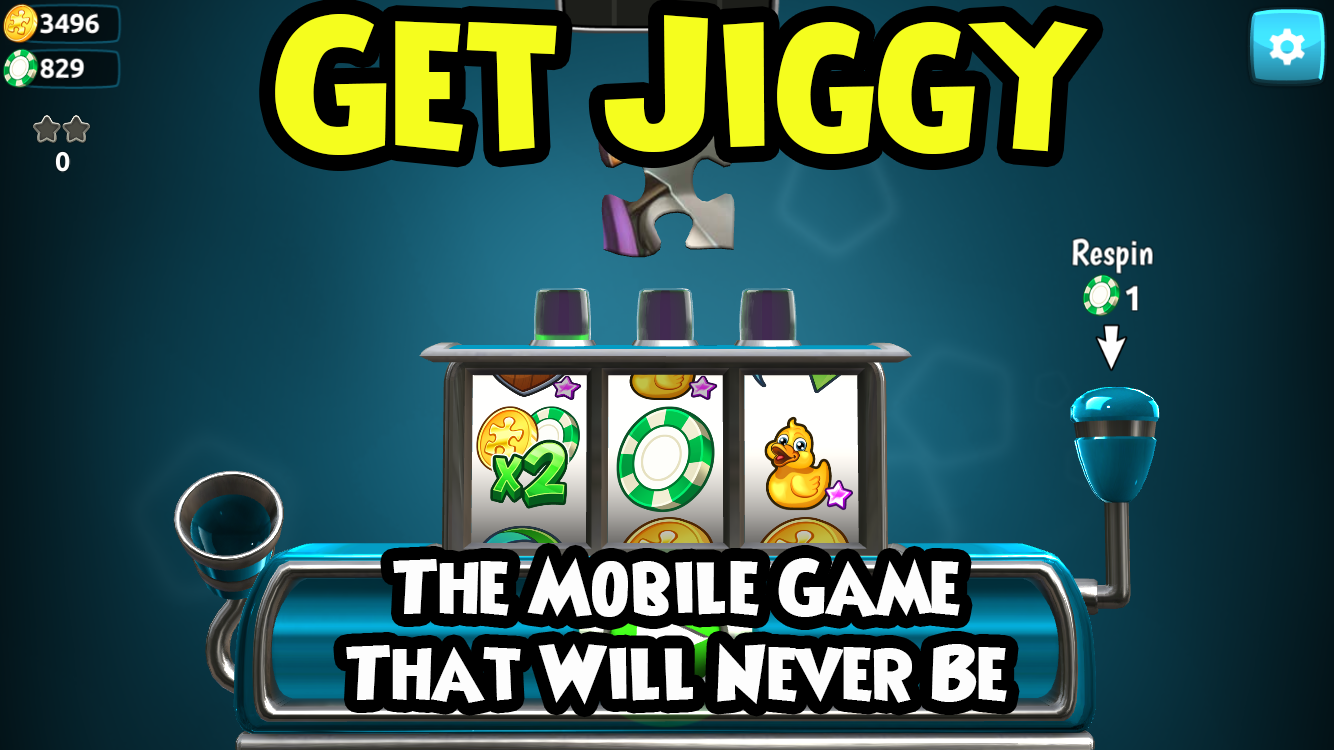 On July 8th, 2016, KingsIsle announced that a new mobile game had been soft-launched in Canada – Get Jiggy. The competitive puzzle battle game had an anticipated worldwide release for early Fall 2016. Yet, here we are in Spring 2018. What happened? Well, it’s tough to say. Get Jiggy was one of those games that KingsIsle didn’t really talk about. It was mentioned on KI Live once or twice, but other than that, it was just something that the community knew was “there” … somewhere. The game never got an expanded soft-launch release, and to my knowledge, only had one major update back in Spring 2017 for its Canadian players. Since that update, KingsIsle’s been mum. Even more interesting is that Get Jiggy was quietly removed from the Canadian appstores some time ago. Though KingsIsle never officially made a cancellation announcement regarding the game, all signs point to exactly that. Having only been released in Canada, the amount of players who had access to the game is very slim. Luckily, I downloaded it from the Canadian App Store before it was taken down, and I thought I’d show you what the game was about.

First things first, I had no idea that the game would eventually be taken down. When it became clear to me that the game would probably never get a worldwide release (social media accounts and website both stagnant for quite some time), I downloaded the app out of curiosity. Just to see what it would have been like. I don’t normally like to download apps from foreign app stores because it creates a problem if you want to purchase something from the cash shop later. (Hence why I didn’t download Animal Cove or War Goonz the same way. I’d just rather wait for the US version if there’s a good chance that the game will actually be released). Even though Get Jiggy has since been removed from the Canadian App Store, the game is still playable on my phone. So, for all you curious cats out there … here’s what could have been!

Get Jiggy as a whole feels more “mature” than KingsIsle’s other games. It has a very casino-like tone to it from the way the puzzles are presented all the way down to the sound effects. You can actually listen to the Get Jiggy soundtrack on SoundCloud to see for yourself. I mean, the song that plays when the game opens is even called “Invitation for Leisure,” lol. The different tone aside, I actually really dig the music. It’s quite relaxing when doing the puzzles. 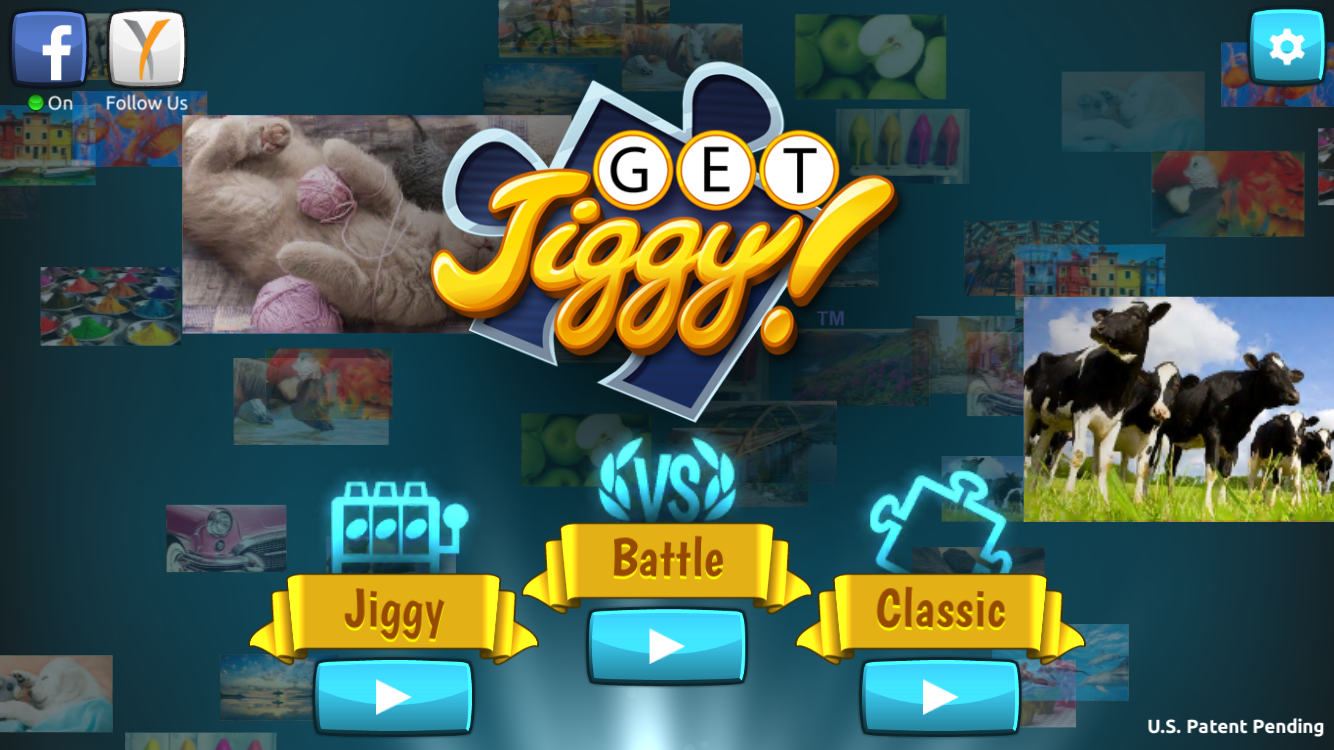 Slot machines, loot wheels, and tokens (which strongly resemble poker chips) are heavily featured in the game as well.

Get Jiggy has 3 different gamemodes: Jiggy, Battle, and Classic. Every gamemode allows you to choose a puzzle’s difficulty (the more pieces it has, the more difficult it gets).

The Jiggy gamemode splits puzzles into different “chunks.” You complete one chunk at a time and score points based on the following categories:

As you’re working on the puzzle, you’ll encounter multiple “dud pieces.” These puzzle pieces don’t actually go to the puzzle you’re working on … they’re flipped. Whenever you spot these, you have to drag them to the vacuum on the left hand side of the slot machine. 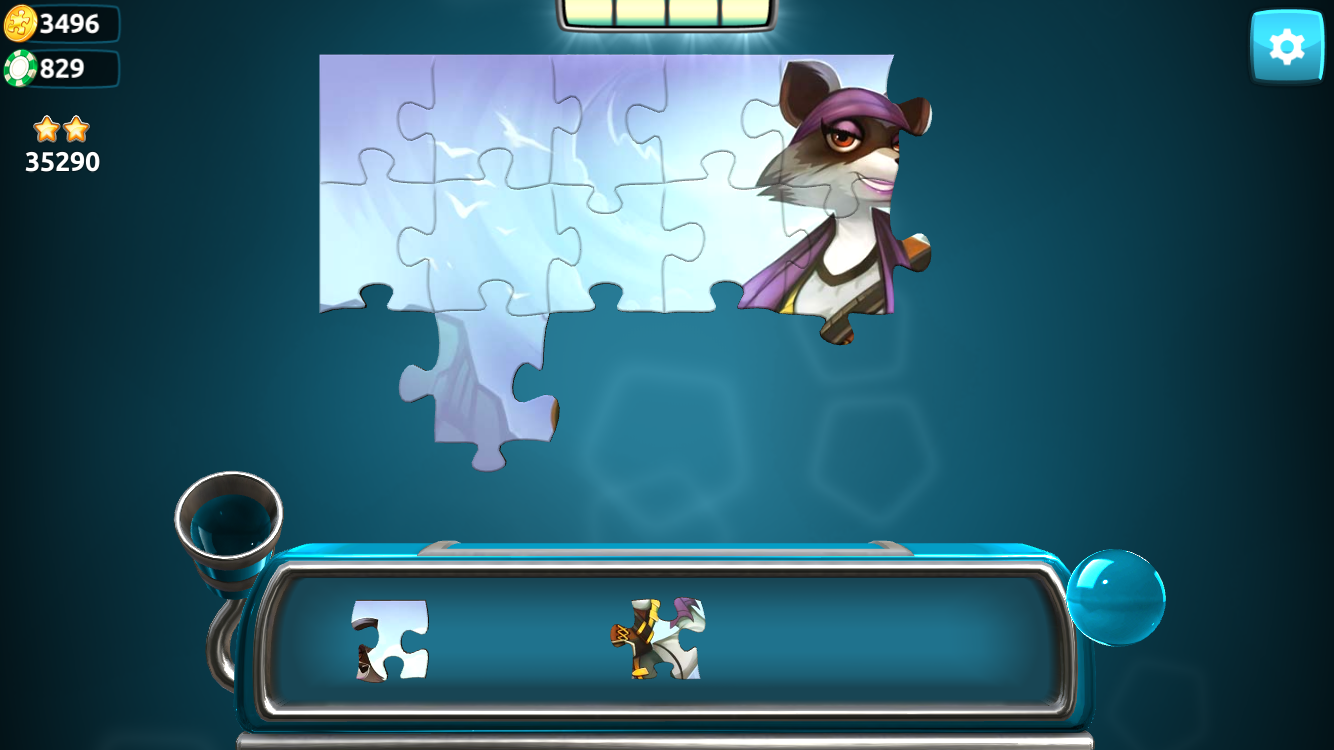 The biggest thing to remember about Jiggy mode is that speed DOES NOT matter. It’s all about your strategy and how you place the pieces on the board. When you’ve completed the puzzle, your Score Card will appear. This tells you how well you did in each category. Your total score determines how many stars you earn and put towards the “Prize Wheel.” The Prize Wheel is just as it sounds – a spin on a loot wheel which gives you a chance at obtaining extra coins, tokens, and goodies. Score high enough in each category and you may actually earn the “Get Jiggy” bonus. Though I’ve gotten close to doing this a few times, I’ve never actually achieved it. :(

Assuming you’ve friended a few people in the game, you’ll also be able to view and compare their scores on that particular puzzle to yours.

You can see me playing a game in Jiggy Mode below:

Battles are basically Jiggy puzzles against other players. The big difference? Battles are in real time and speed matters! You’ll earn more points if you can successfully place correct pieces before your opponent does. If you’re in the mood for some competition, you can challenge your friends, or the world to a battle. VS World will simply put you up against another random player, but since this game never got out of Canadian soft-launch, the pool is incredibly small. If the game can’t find you a real opponent, it’ll put you against a bot. I’m not sure if this was always intended or just implemented for testing purposes.

You and your opponent will take turns selecting chunks of the puzzle. From there, it’s a race to complete it faster and with more precision. It’s important to remember that you’ll be graded on the same categories as the Jiggy section above … so speed isn’t an excuse to be sloppy. Luckily, you’ll be able to spin the slot machines for powerups and can collect flying coins and green lights while you wait for your opponent to finish the puzzle (call it a speed incentive). You’ll also have the option of chatting with your opponent in-between rounds through premade phrases. 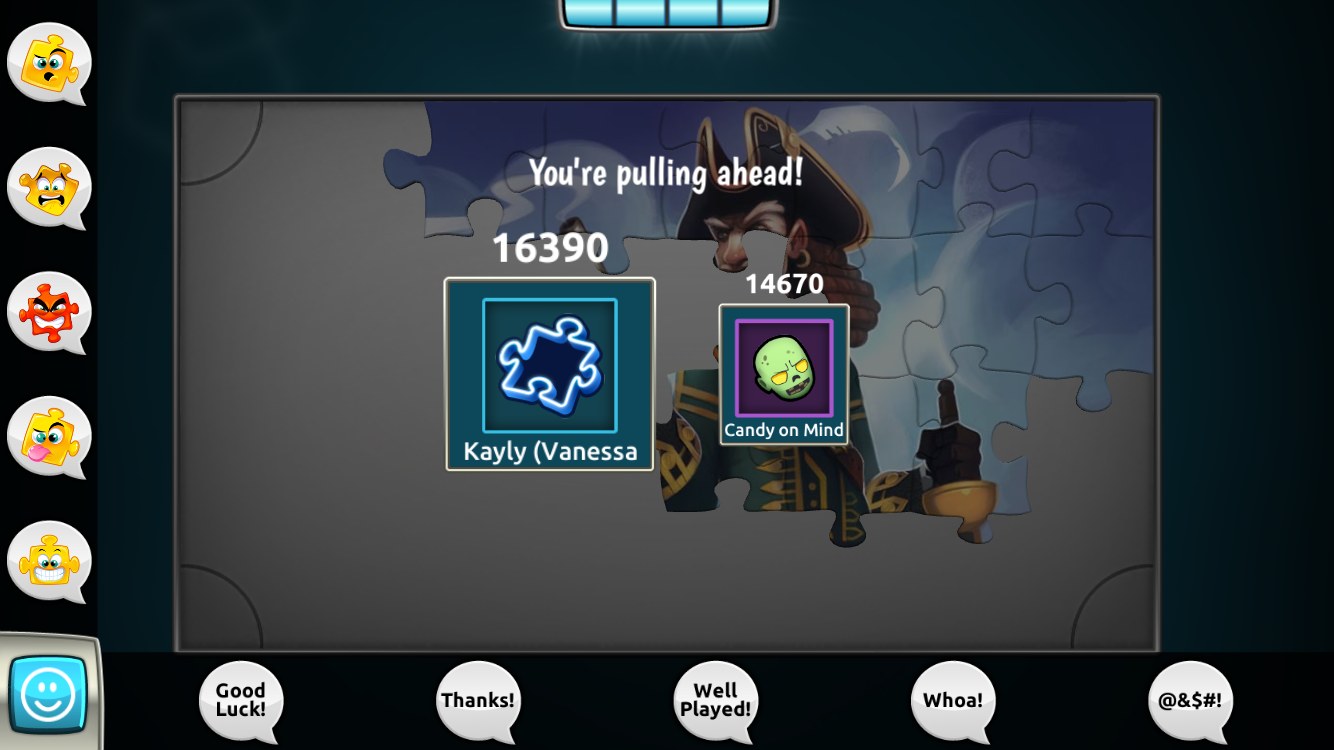 Once the battle is complete, your Score Card will appear and give you your rewards. Battles reward trophies which you can view on the leaderboard. The more trophies you earn, the higher on the leaderboard you’ll be. Your performance during battles will also affect your Skill Rating. Winning increases it, and losing decreases it. It’s pretty much the equivalent of rank in Wizard101 and Pirate101 PvP. 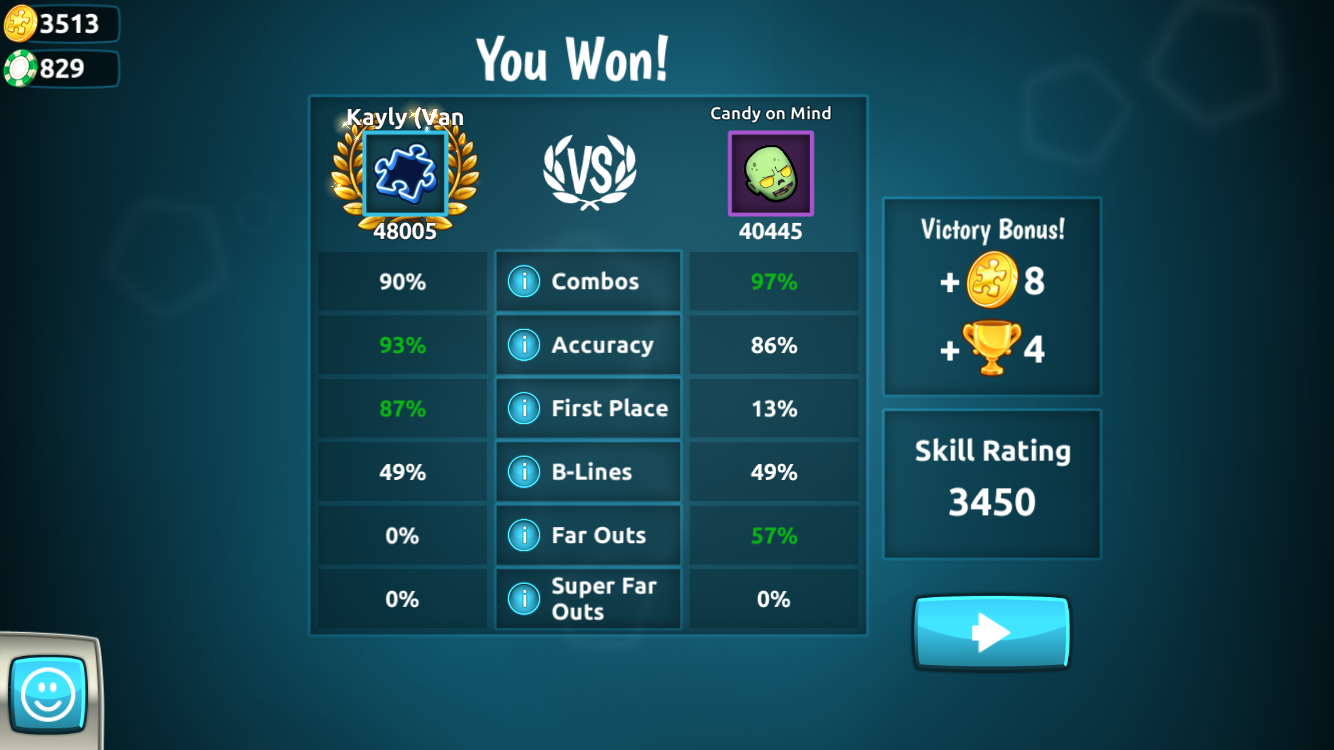 You can see me playing a game in Battle Mode below:

Classic mode is exactly what it sounds like – classic puzzle building. You’re given all the puzzle’s pieces in the slot machine and tasked with piecing it together. The puzzle board is magnetized so pieces will “snap” into place when you drag them close to their destination (though this function can be turned on and off at your leisure). You’re also able to lock portions of the puzzle so they can’t be moved. Pretty simple gamemode, but also challenging and time-consuming if you attempt puzzles with a lot of pieces! 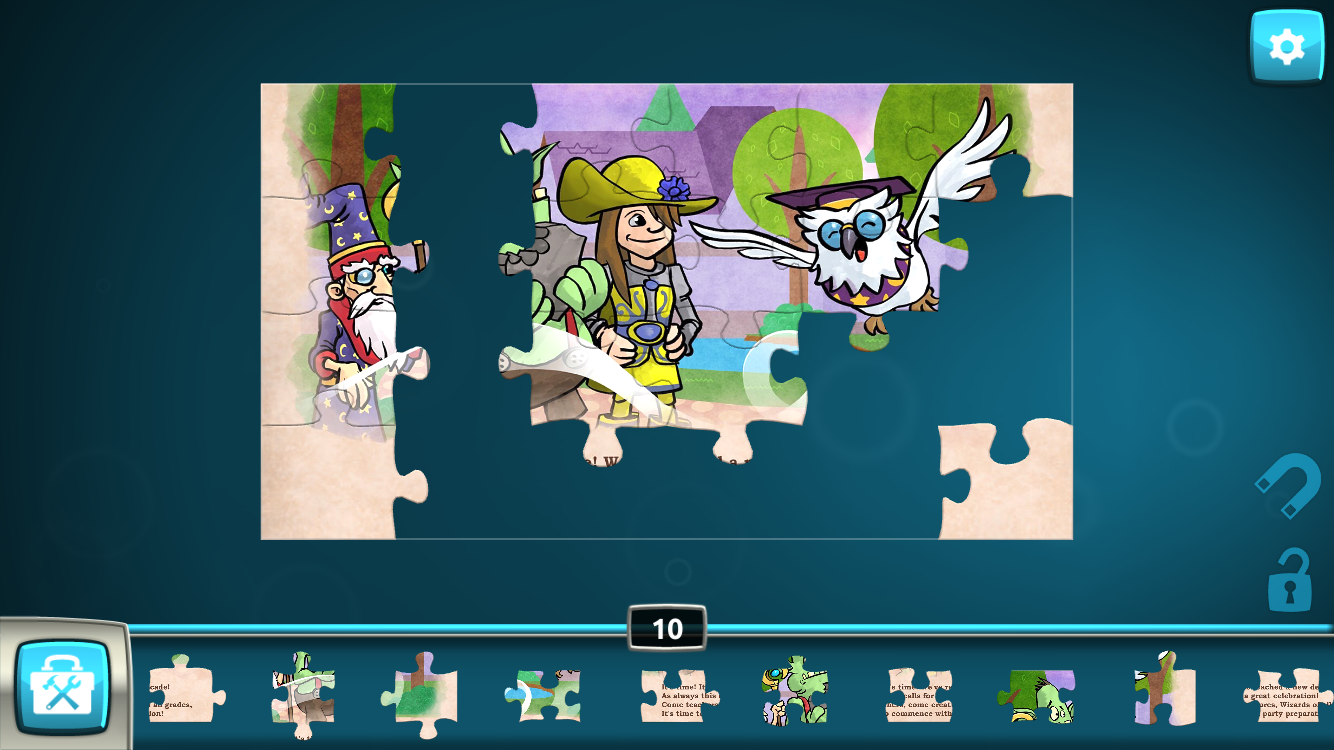 You can see me playing a game in Classic Mode below:

Get Jiggy allows you to create custom puzzles of your own photos for a cost of 750 coins. You can see I made a puzzle of my Wizard101 Storybook Page below. 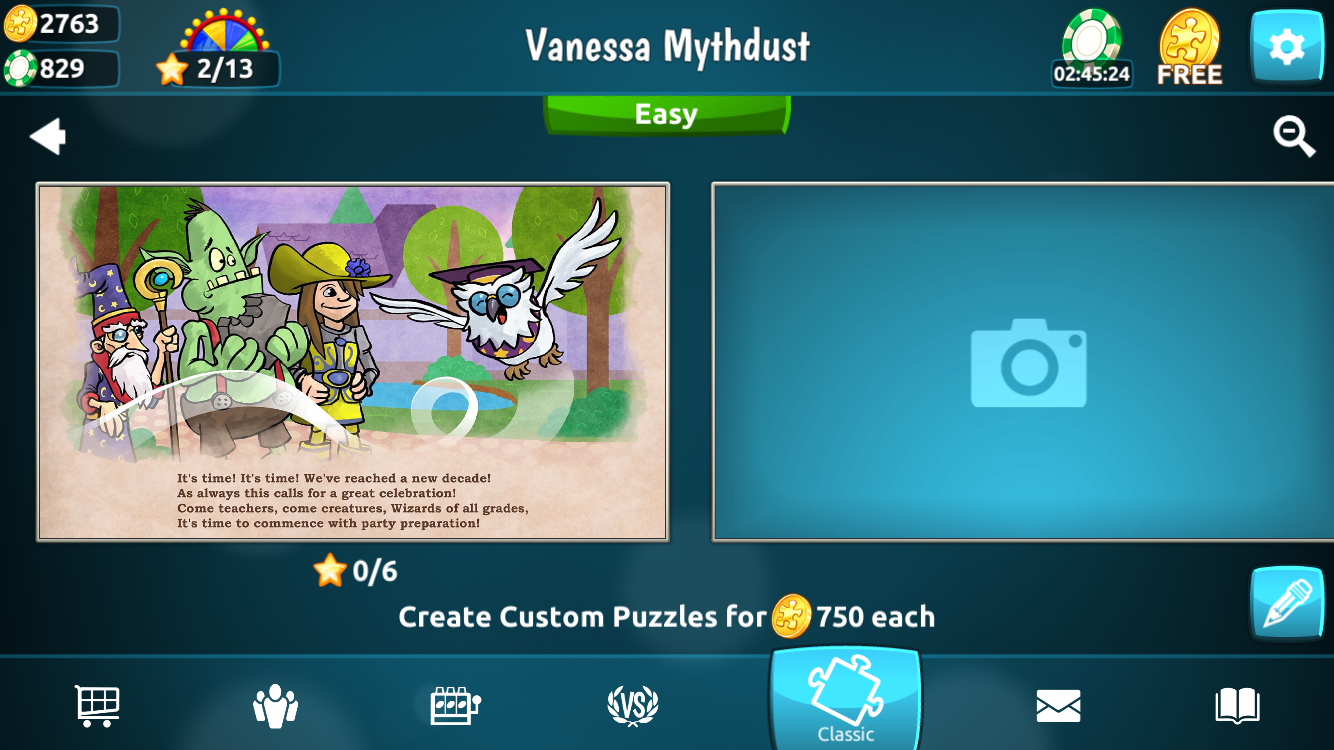 As you complete puzzles, reach milestones, and beat opponents, you’ll earn achievements. Each achievement gives you a reward. While some take longer to complete than others. there’s always 3 daily achievements you can tackle each day. 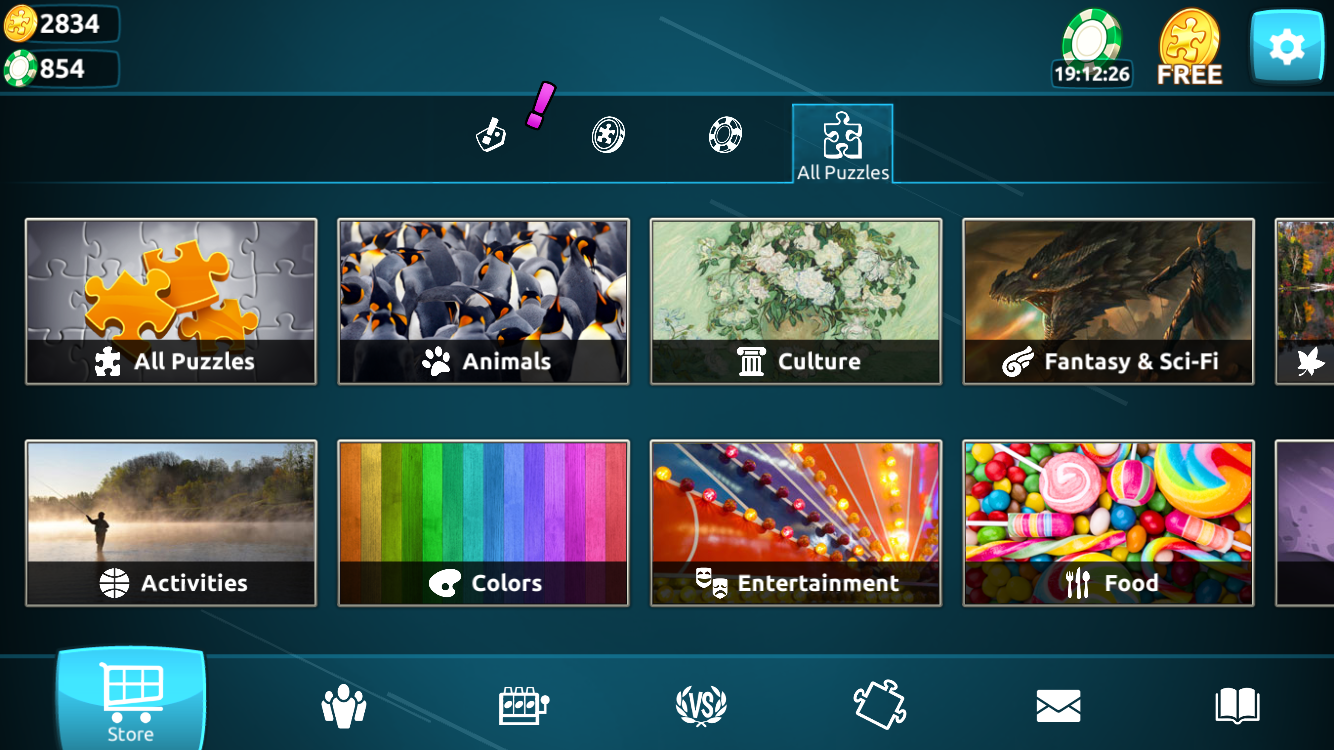 The game starts you off with a very basic puzzle pack called “Variety.” From there, it’s up to you to collect currency and purchase more puzzle packs in the shop. There’s a lot to choose from, but they’re very expensive. Coins take awhile to build up, and I’ve only been able to purchase one additional puzzle pack (Spiral Characters). Being a huge fan of KingsIsle games, I’ve found the Get Jiggy Wizard101 and Pirate101 art very cool. Here is what the Spiral Characters puzzle pack contains: 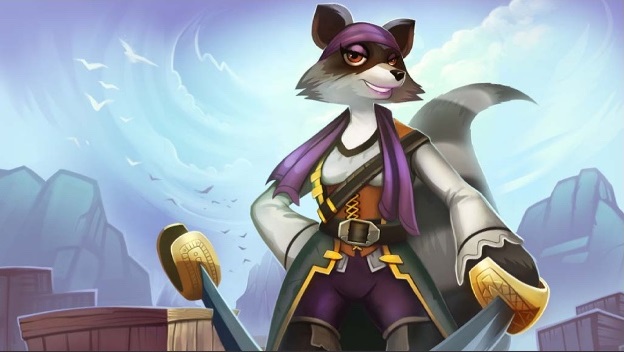 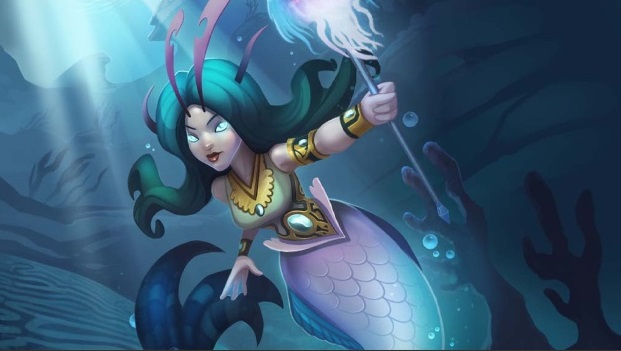 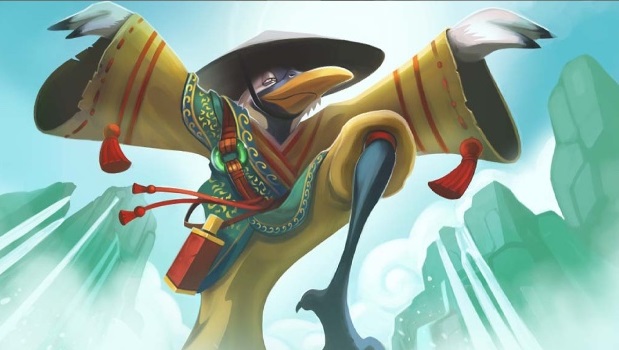 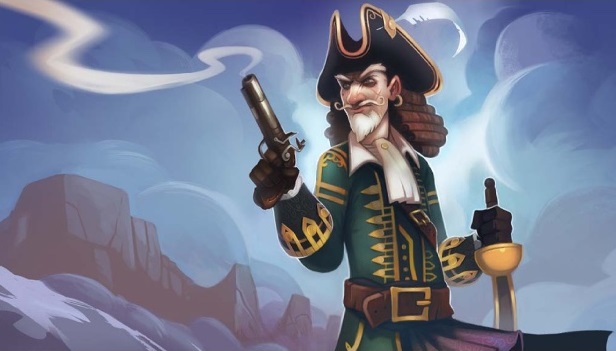 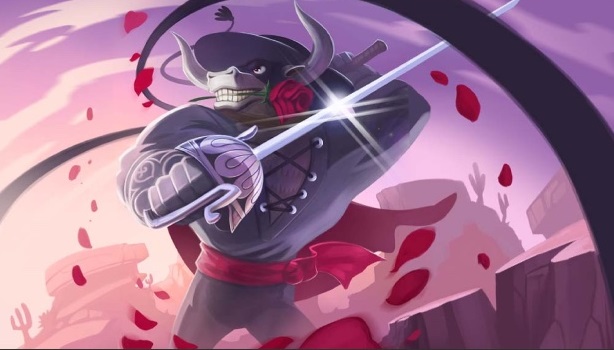 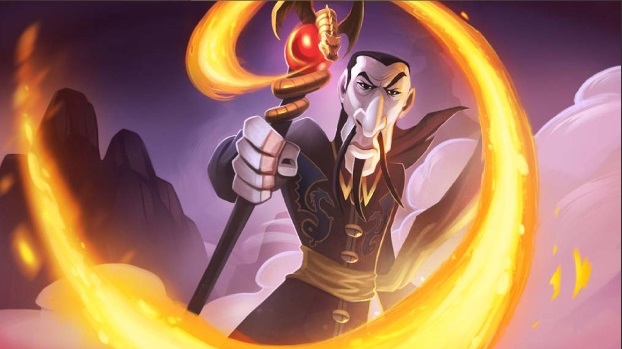 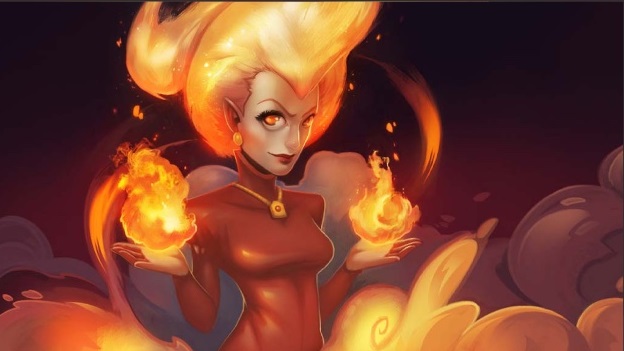 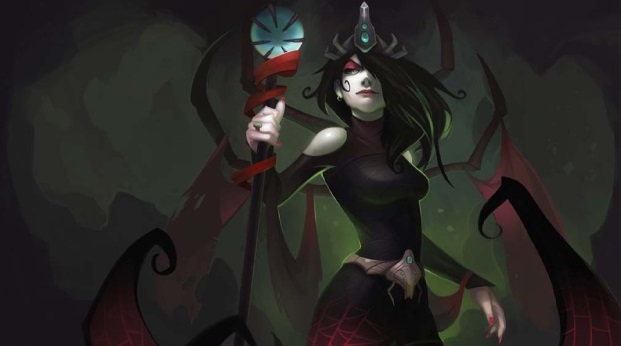 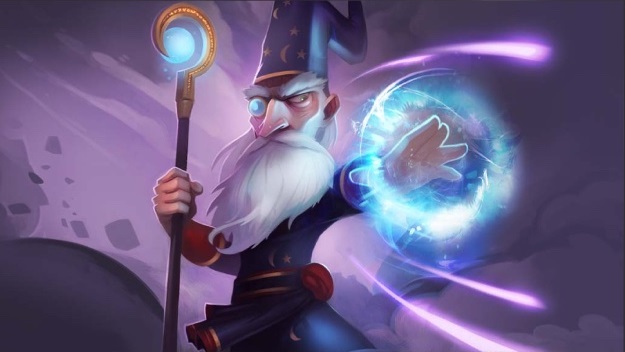 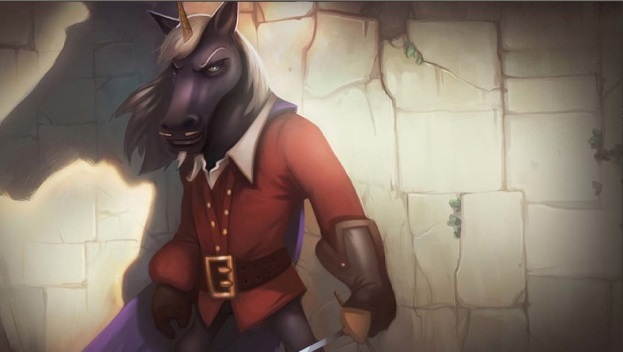 But even outside of those, there are still many spiral concept art puzzles to potentially unlock: 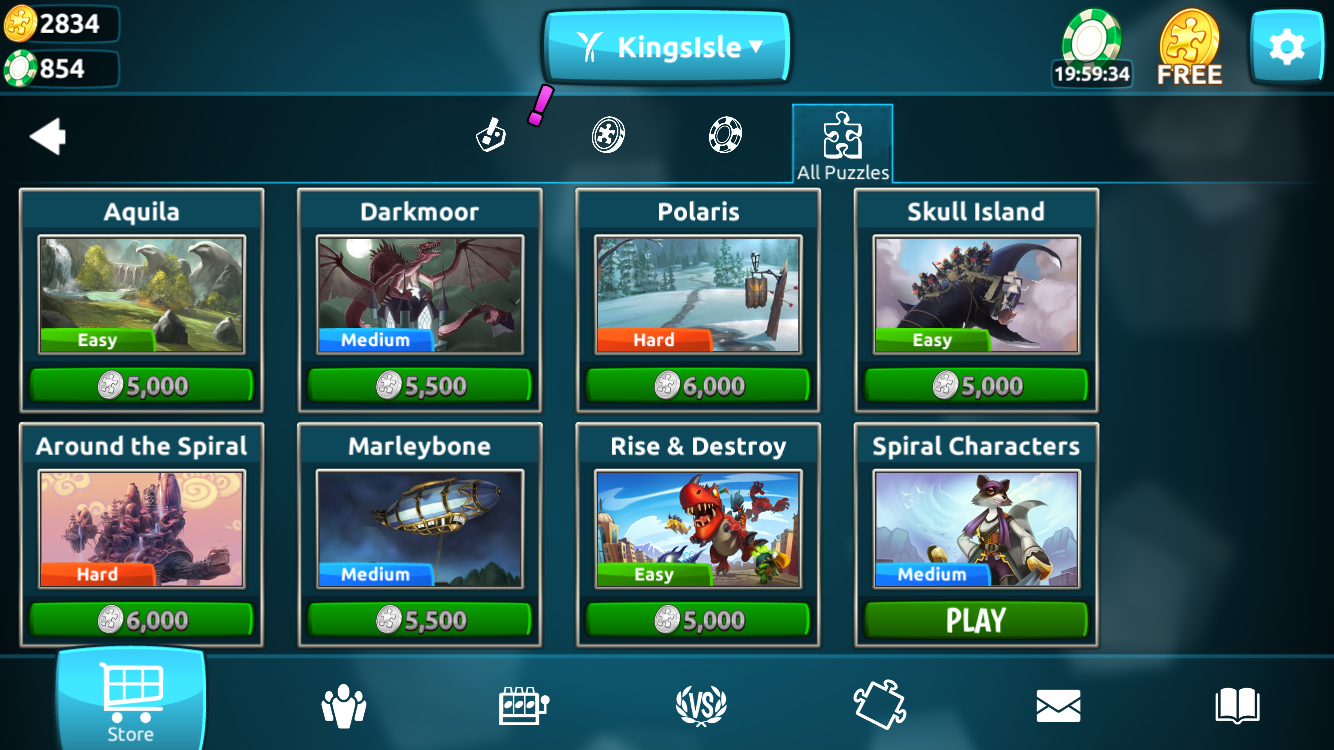 Get Jiggy was an interesting idea, but the soft-launched game is rough around the edges (to be expected with release in only one territory). While I’ve had fun puzzle battling in real-time, my biggest issue with it is how hard it is to obtain coins. You can’t unlock more puzzle packs without coins – and completing the same puzzles over and over again gets tiring. Perhaps the game’s repetitiveness and more mature direction is what caused it to be abandoned. However, I don’t know for sure, and I don’t think we’ll ever know.