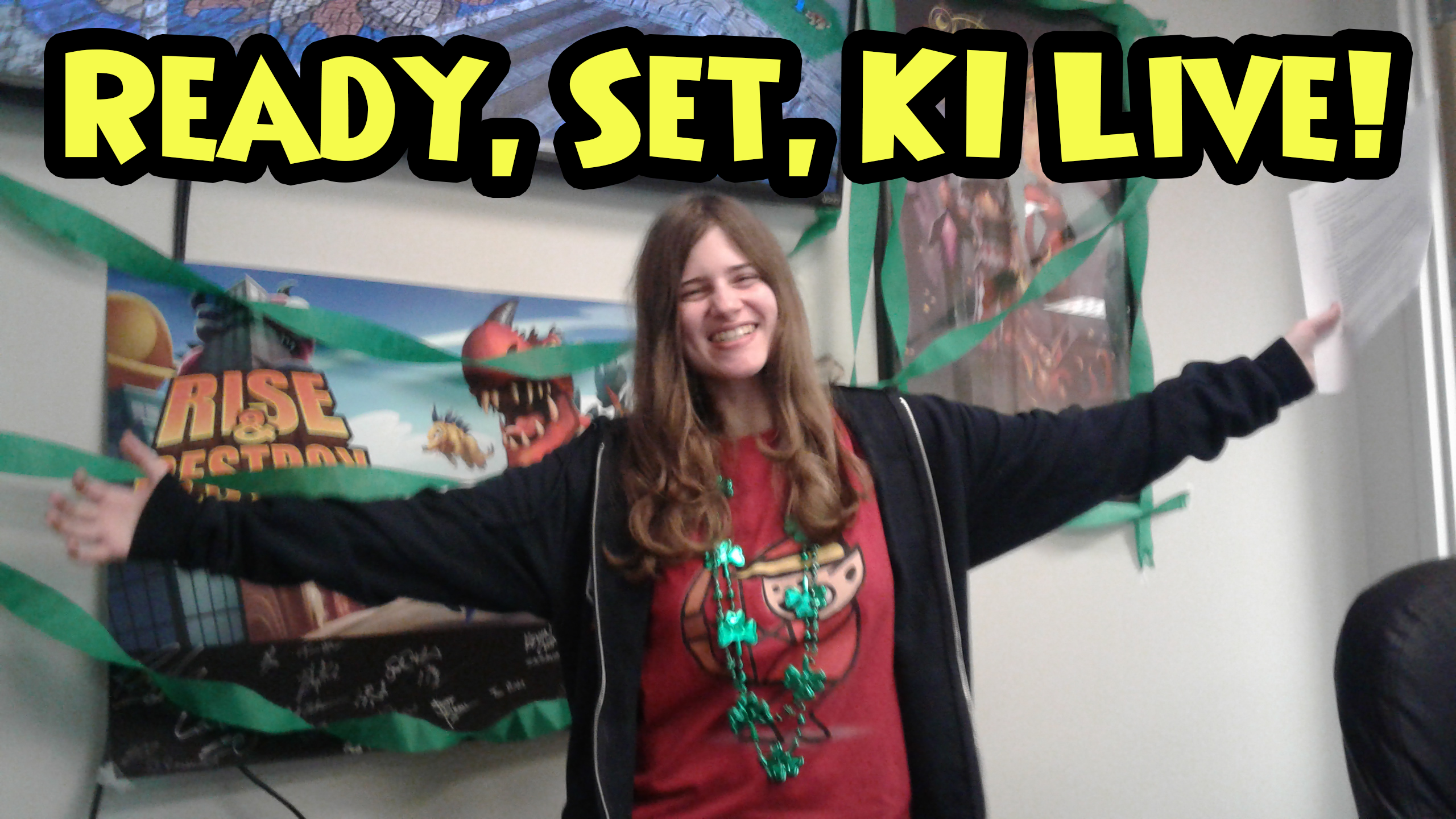 As many of you know, I took a short trip to Austin last week. Once there, I got to hang out at KingsIsle, do KI Live, and even say hello to some old friends. Here’s a description of all the crazy (and awesome) things that happened on my trip!

My trip began Thursday afternoon. I’ve had problems with the bus company I use in the past, so I thought it would be best to arrive a day early. I took a cab from my dorm to the bus stop, and luckily the bus was on time! Once I boarded, I put on my headphones and relaxed for 2.5 hours. After I got to Austin, I checked into my hotel and met up with Tom. We ended up going to The Olive Garden (yay breadsticks) and I got to meet his entire family. Psst … his kids are adorable and his wife is super nice. While at dinner, one of Tom’s kids drew a few doodles of me! Tessa is a very talented artist and I love the way the doodles came out! After dinner, I went back to the hotel to get a good night’s rest. This trip was actually the first time I had stayed in a hotel by myself. So naturally, what do I watch before I go to bed? A TV show about a murder case. Sweet dreams …. 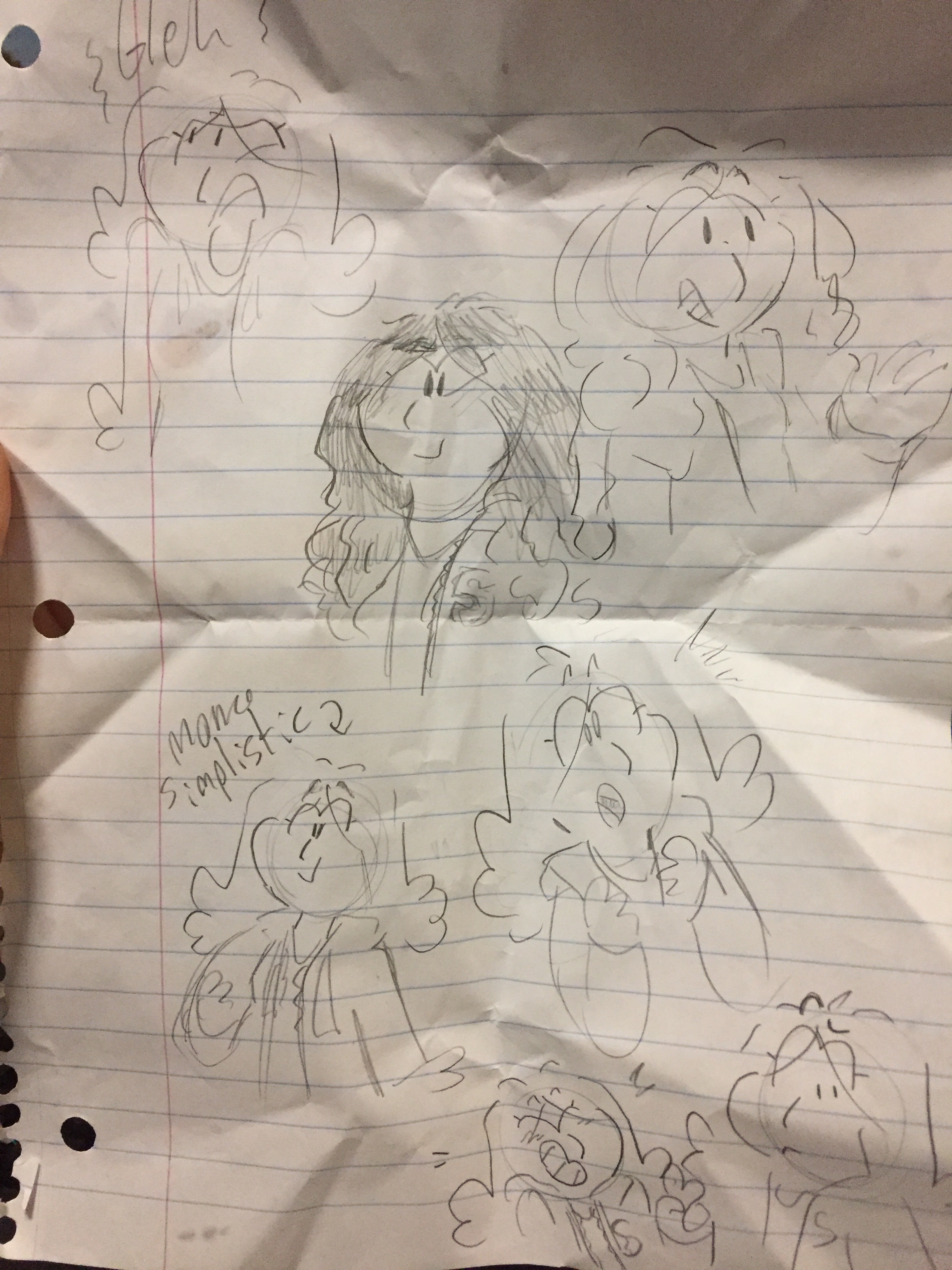 Cute doodles of me by Tessa!

After I woke up, I walked over to KingsIsle to meet up with Tom again. He had me sign an NDA, and took me on a short tour around the office. For those who don’t know, this was actually my second time visiting KingsIsle. My first visit occurred a little over a year ago, and that one was much more tour-oriented than this visit. While walking around, I got to meet Leah Ruben and Josef Hall for the first time. Leah had a killer office … posters were all over the place and she even had a dartboard! Meeting Josef was an unexpected surprise. He seemed pretty happy to see me and asked me a few questions about the game and my college experience. It was great to meet him! After our mini-tour was done, I hung out in the marketing department for awhile.

It turns out that KI Live days are pretty hectic! By the time I arrived, Tom already had a typed up outline of what the show would go over and where I would come in. When I saw how much they were planning to reveal, I knew you guys would be freaking out on social media. As a side note –  the 10 Twitter questions they were going to answer were already selected. Make sure you get your questions in early! 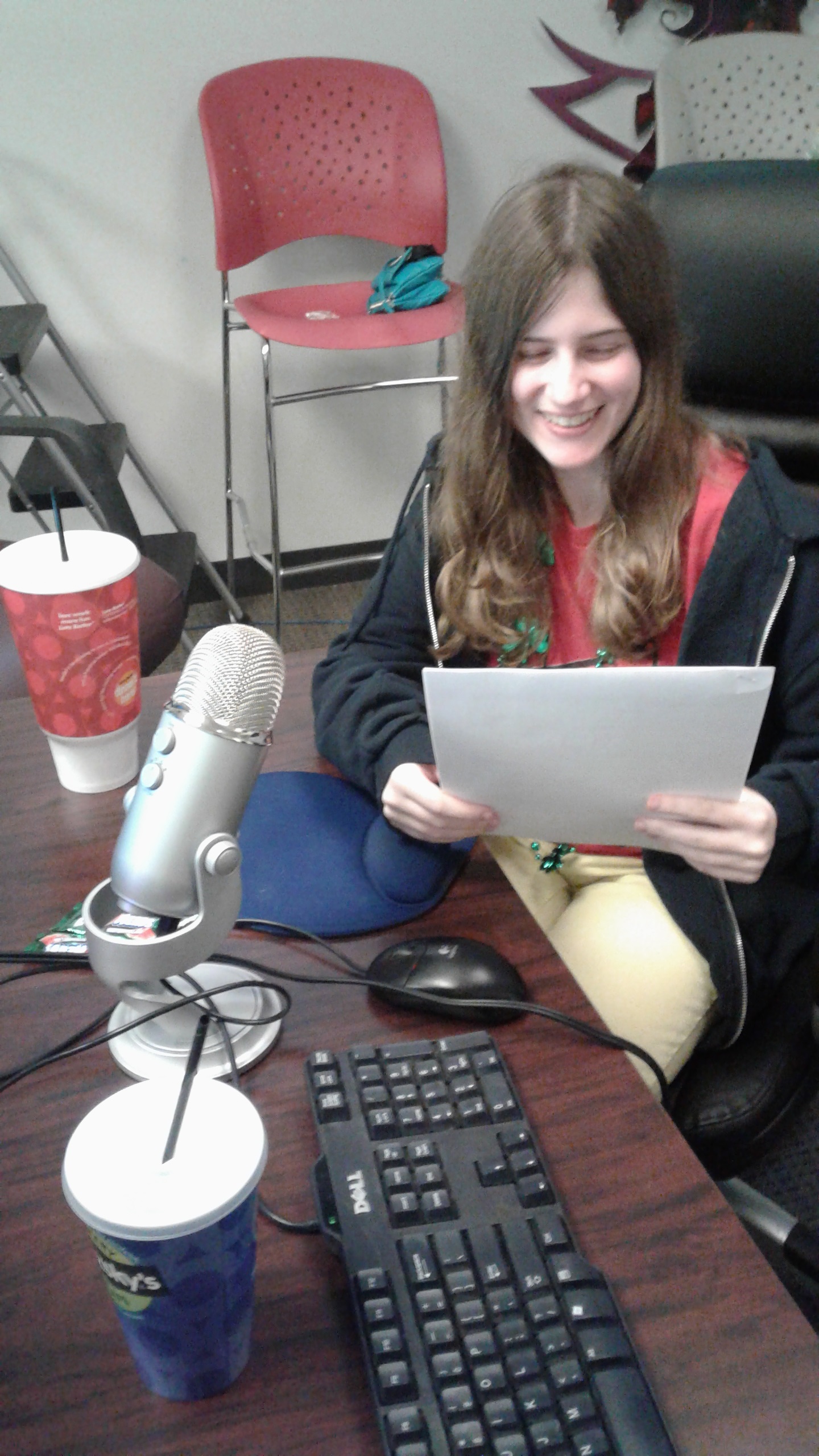 Me reading over the KI Live script!

I was so excited to wear my fire elf shirt that I completely forgot to wear green! To remedy this, Tom drove me to Party City where we picked up some St. Patrick’s Day swag. He got that fancy glitter hat and I got some green beads. Crisis averted. Before we made our way back to KingsIsle headquarters, we picked up sandwiches for lunch and stopped by an interesting store that had unique candy (seriously, I had never seen these candy brands before in my life). Austin has some of the coolest places.

March 17th happened to be Cake Day at the KingsIsle office! I grabbed a vanilla cupcake and a slice of coconut cake. While in the “cake room,” I ran into Jeff Toney. It was wonderful to see him again! Just when I thought the day couldn’t get any better, Kat Wenske offered to take me to a sweets shop down the road. I didn’t even hesitate on that one. For the record, Kat is just as bubbly  and energetic as you would guess based on her Wizard101 Twitter account takeovers. I had met her briefly at Wizard World and SXSW, but it was awesome to spend more time with her on this trip. 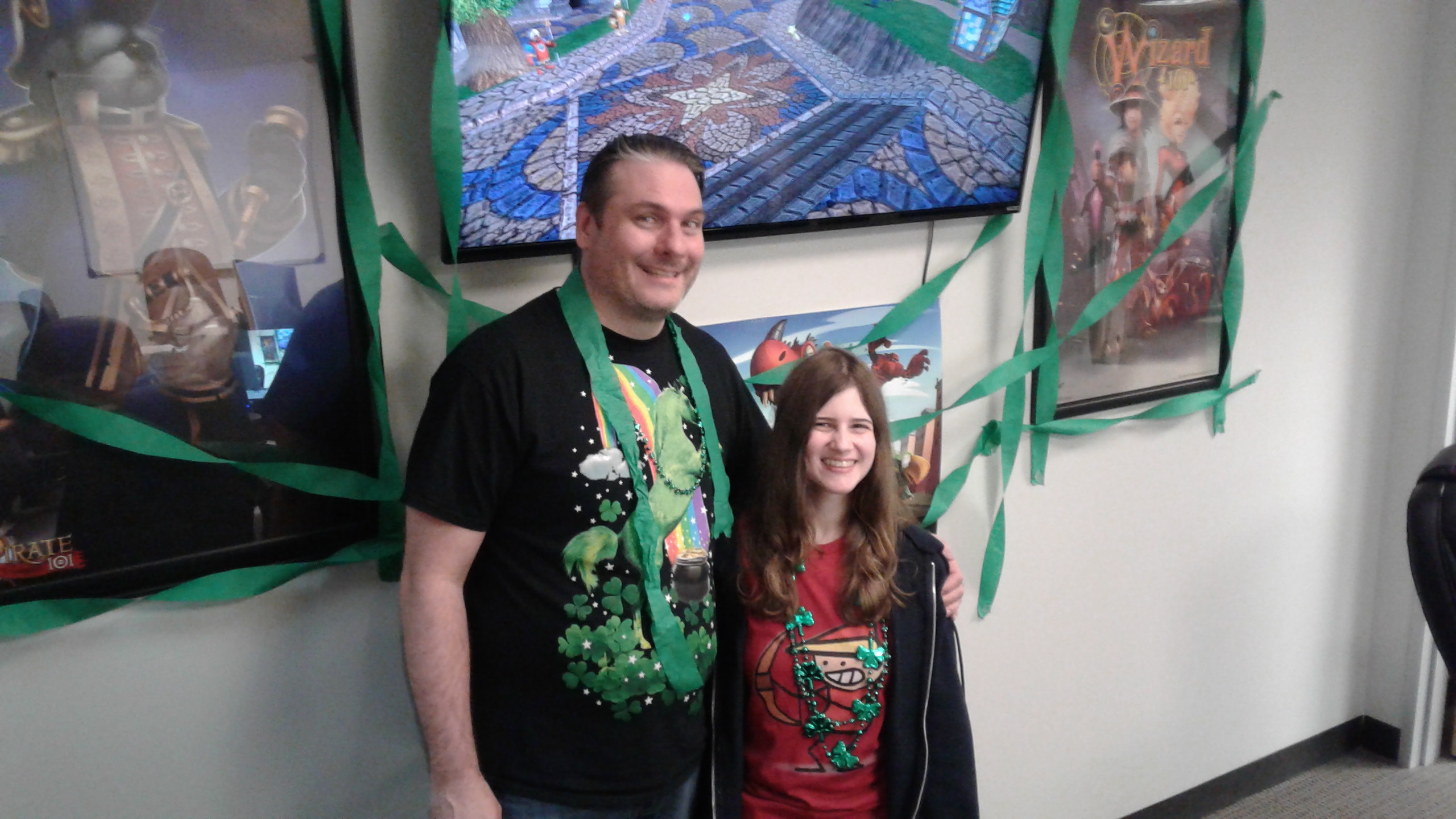 Me and Tom pre-show.

The KI Live equipment isn’t permanently in the “KI Live Room.” In fact, the KI Live room is actually just a transformed conference room. Tom and I placed all the computer equipment on rolling chairs and wheeled everything into the correct room. It was here when I met the one and only, Decius Duelmaster! Joel rocks. With showtime nearing, we picked where the “fly cams” in Wizard101 and Pirate101 would be, and Tom gathered the rest of the player screenshots. After a few video and sound tests, everything was good to go!

I was SUPER nervous, but everyone reassured me that I would be fine. When I wasn’t on camera, I was either following along on Twitter (your reactions were priceless) or watching Tom and Leah do their thing right in front of me. KI Live doesn’t get any more live than that. 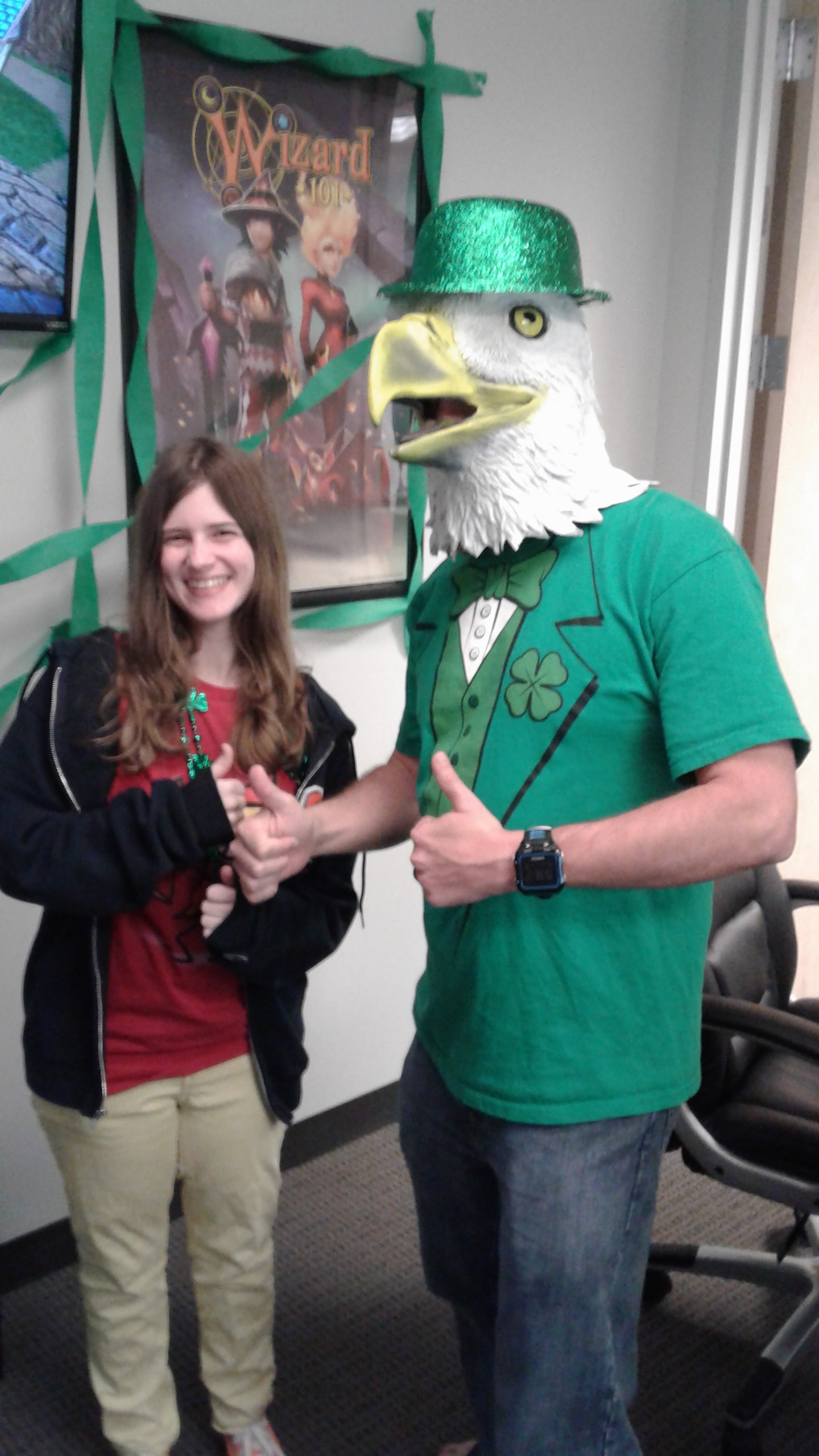 After the show was over, we wheeled all the equipment back into the right room. I watched Tom send the winning KI Live codes and then … the day was over. Somehow it all went by way too fast.

Saturday morning I met up with Leala (former Greyrose) and her husband for breakfast. It was wonderful to see them again and catch up. Despite their attempts to turn me into a rebel, I don’t think they succeeded. ;) What can I say? I think I’m the definition of a goody two-shoes. After a few other stops, I made my way to the bus stop and eventually arrived back on campus. Napping was the only way to cure my exhaustion. 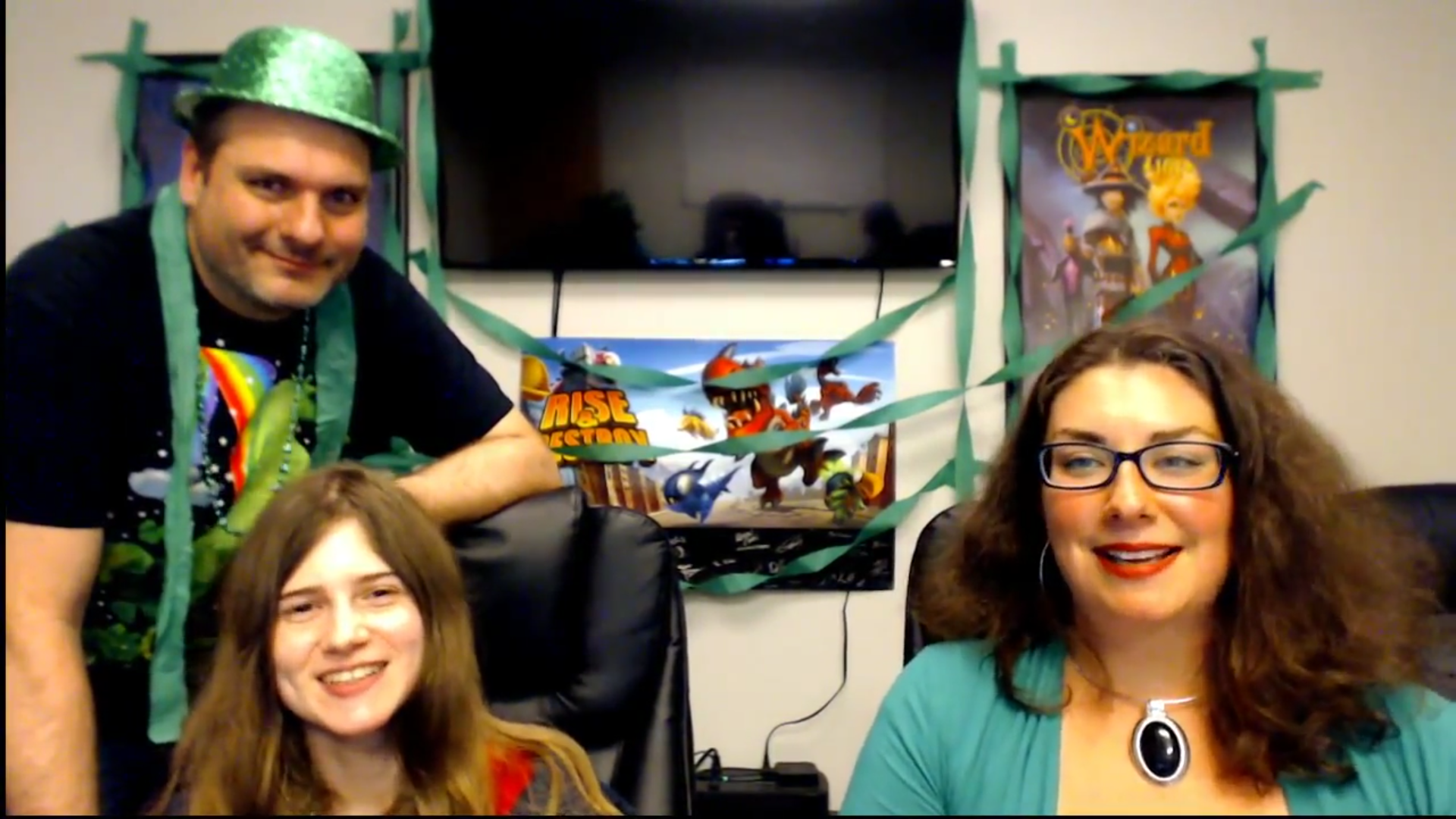 Overall, I had an AMAZING time. Thank you to KingsIsle, and especially Tom, for giving me this opportunity. It was truly an unforgettable experience. :)