My spring break ended on a high note after I took a short weekend trip to Austin to check out the SXSW (South by Southwest) Gaming Expo. It was an event that was completely free and a lot of fun! I’m sure many of you are wondering about the experience and what I did … so I thought I would make a post about it!

What is the SXSW Gaming Expo? 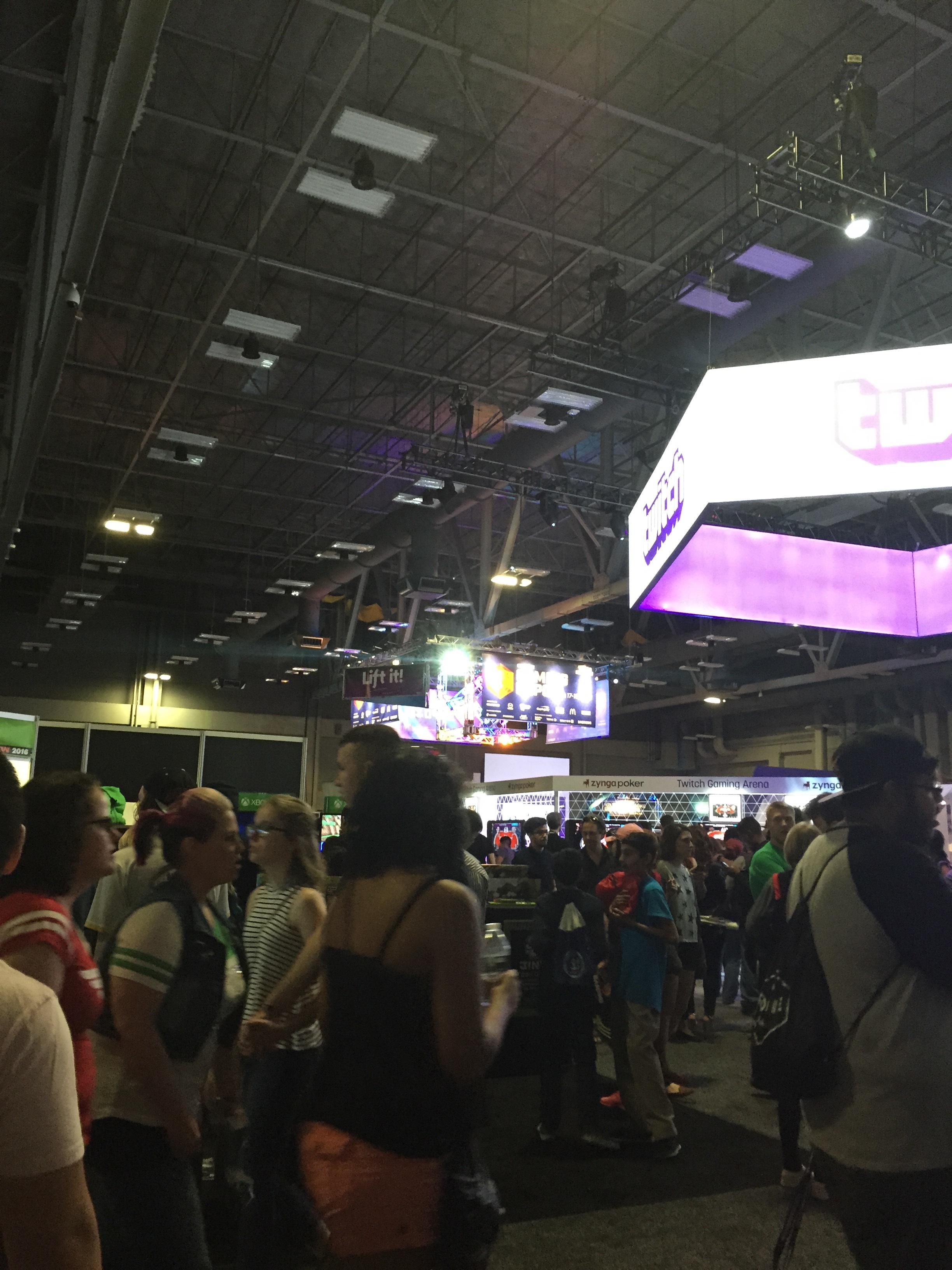 The SXSW Gaming Expo is a free event under the umbrella of a much larger event called SXSW. The expo draws a lot of developers, designers, and game companies both new and old. Attending the expo is a great way to discover new games and personally meet the geniuses behind them. In general, I found most people to be friendly and welcoming. It was a nice feeling knowing that everyone in that building had a real passion for gaming and loved being able to share that enthusiasm with others. Most of the games and companies that were showcased at the expo were on the “hardcore” side, which made the kids and families heavily gravitate towards KingsIsle’s table – one of the very few that weren’t!

Besides games, there were also a couple of artists and stores. The art was amazing (as it is at almost any type of con or expo) and the tiny shops had really cute merchandise. Some of it was very tempting. ;)

Now for the part most of you are interested in – what was going on at KingsIsle’s table?! The answer is a lot! 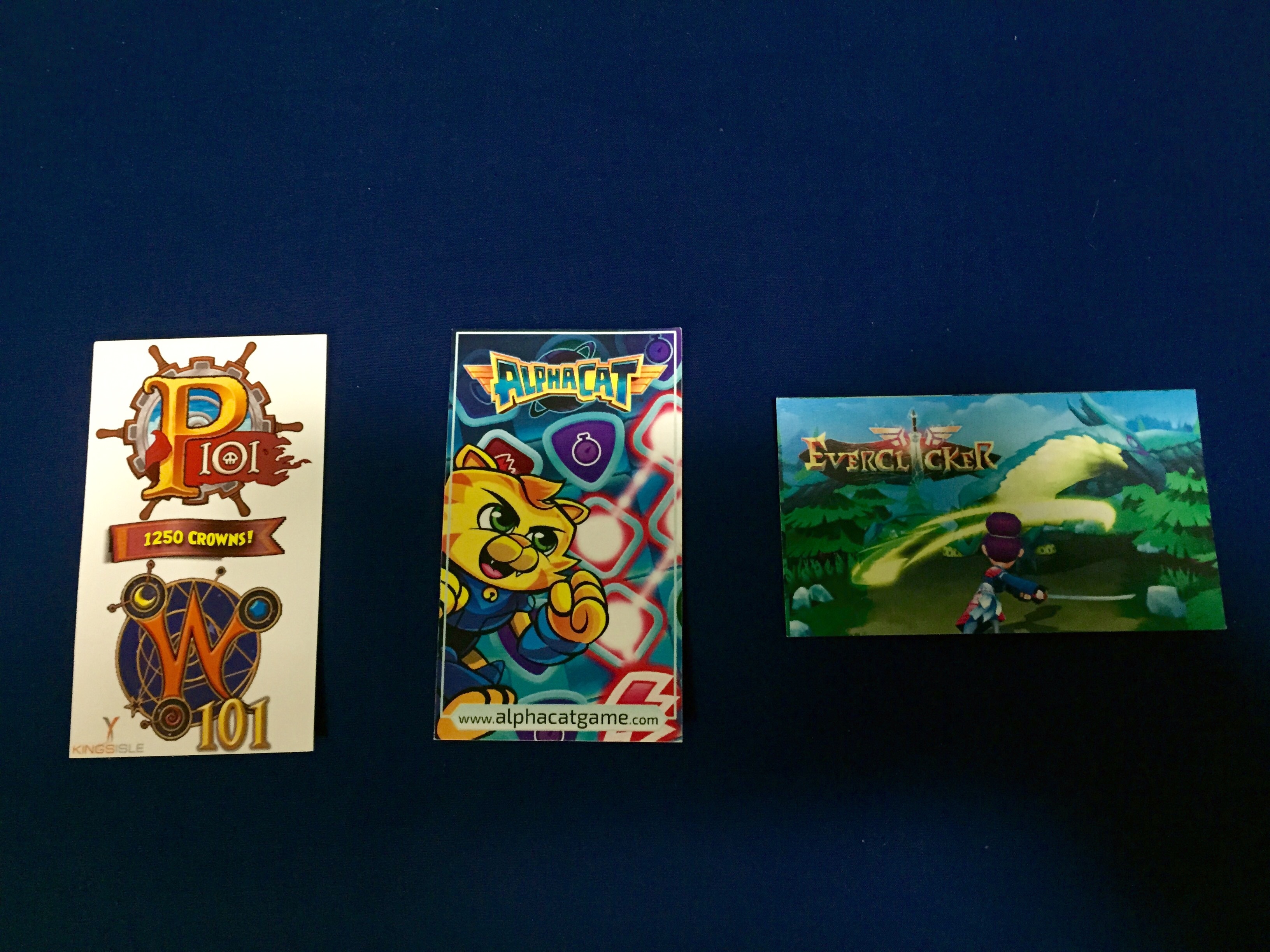 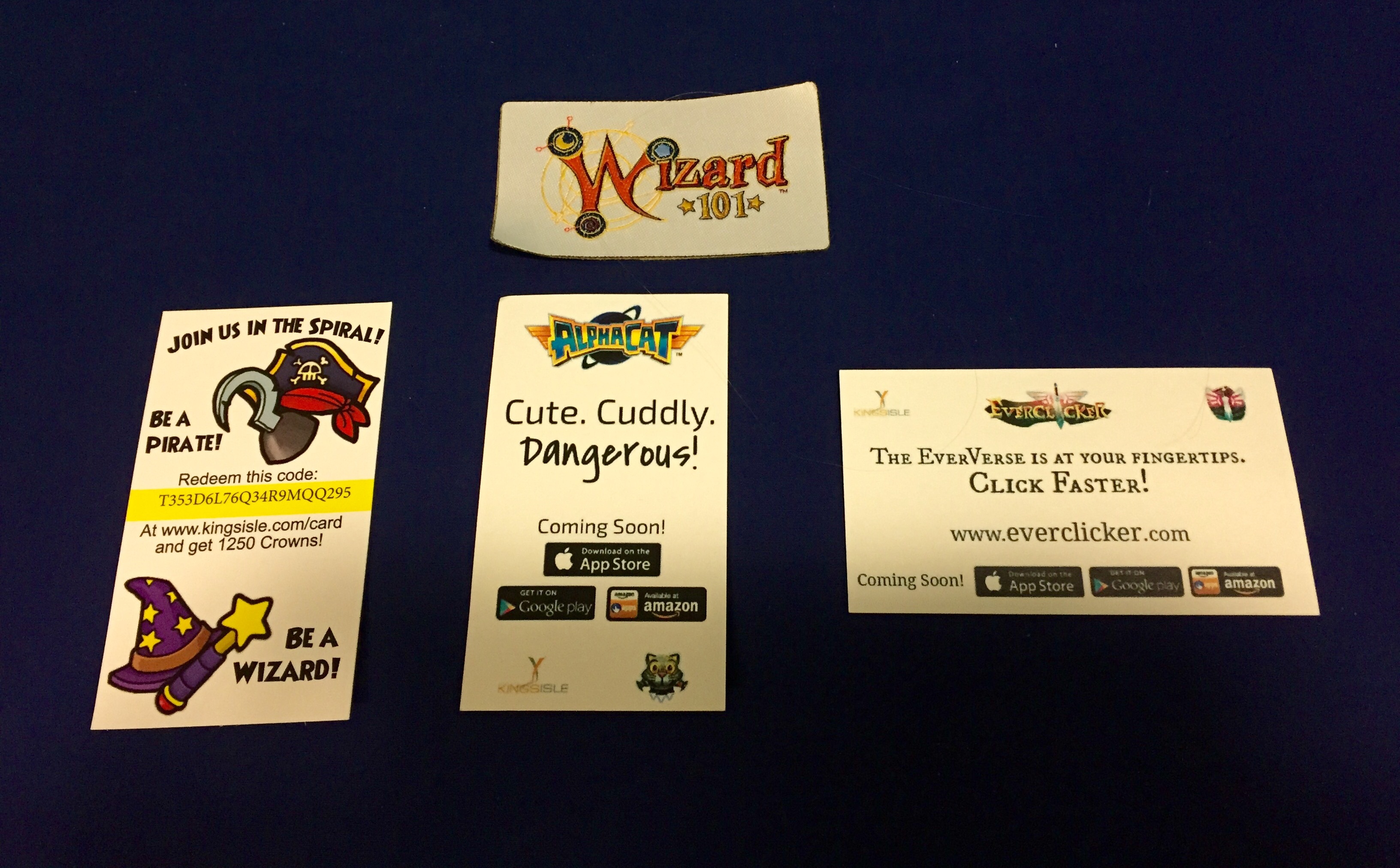 Everyone who popped by the table was able to pick up 3 free cards. The first card gave 1250 crowns in Wizard101 or Pirate101, the second card showed off KingsIsle’s beta mobile game – AlphaCat, and the final card gave a glimpse of a completely unreleased mobile game – EverClicker! Wizard101 stickers were given out the first day, but they must have run out because they weren’t on the table either day I was there (the one in the picture I got back in October when I went to Wizard World). A select lucky few who voiced that they were big fans of Pirate101 were given a special surprise in the form of a map. That’s right, THE map. Back in 2012, KingsIsle sent out Pirate101 maps to players in the mail. The map contained a puzzle, and players had to decode the secret message to unlock an exclusive prize. The prize was the now very rare Ninja Pig companion! Congrats to the few big fans who were able to snag that special and very rare code!

Meeting and Hanging Out With The KingsIsle Crew 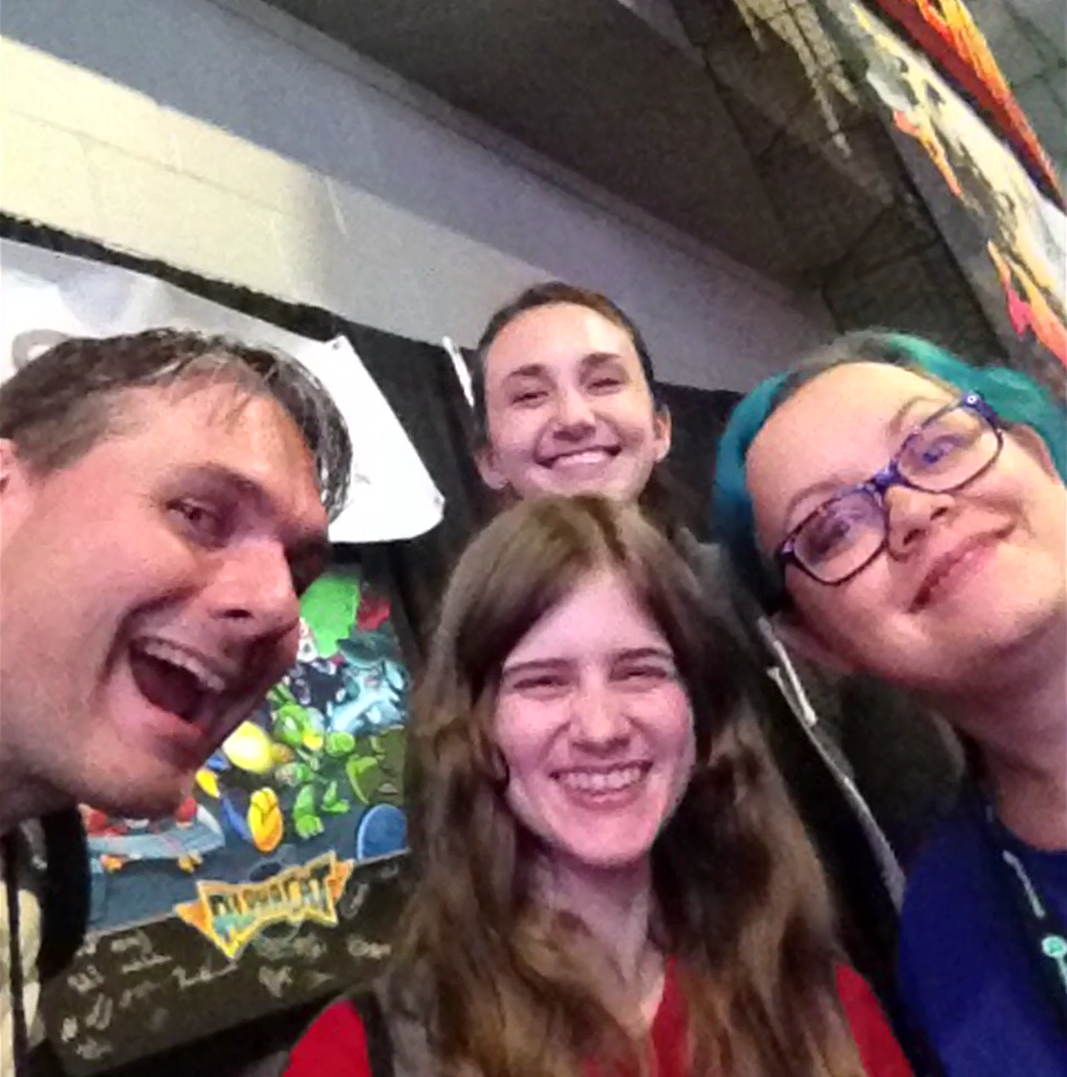 Most of my time at the KingsIsle booth was spent with Tom, Leala, and Julia. All of them are super awesome, but you already knew that! Much love to the community team! Other team members from other departments also stopped by for a short time to meet with fans and promote the games. Sadly I missed the opportunity to meet Leah Ruben (Professor Falmea) and Joel White (Decius Duelmaster), but I did get a chance to meet Kevin Wienecke and Kevin Chin! Kevin Wienecke is the design lead for AlphaCat, and Kevin Chin is the senior concept artist for AlphaCat and Rise and Destroy (his art is amazing, go check it out!) Saturday morning I attended the KingsIsle panel which was about how to get into the game industry. Afterwards, I was able to say hello to Jeff Toney (Doodle Master, but also Principal Artist) and Kat Wenske (Associate Audio Producer), both of whom I also saw at the October Wizard World panel. Jeff Toney drew his signature doodles for fans on the last day of the expo. The two I saw drawn included a portrait and a doodle of the Quakosaurus pet from Pirate101. I left shortly after that, so he probably did more that I didn’t get to see! 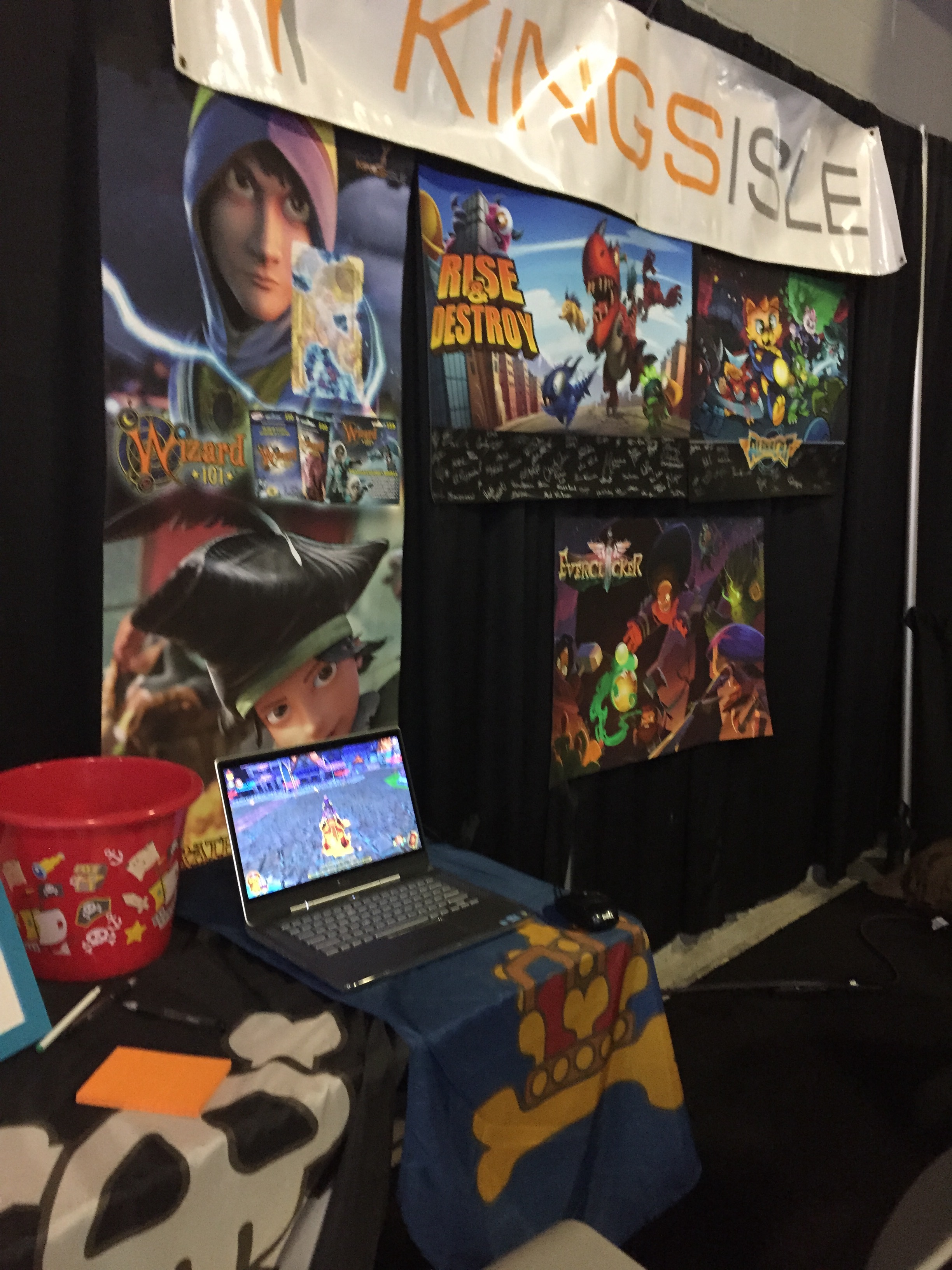 A laptop was set up in the back for expo goers to give Wizard101 and Pirate101 a try. If you happened to be playing Wizard101 in Unicorn Way, Triton Avenue, or Firecat Alley these past couple of days, you may have been playing alongside people at KingsIsle’s booth without even knowing it. Seeing people getting instantly hooked by these two games was something to behold. Most kids were in awe and some would stay for a pretty long time. Others would even come back more than once! To those of you asking about Pirate101 – I sadly don’t have anything for you besides what has already been hinted at in the last Falmea Friday. Something seems to be on the horizon, and that two-pegged fellow probably has something to do with it.

The aspect of the booth that caught the most attention was the mobile games. Like I mentioned earlier, not many booths were very family friendly/kid friendly so when kids saw those tablets, their faces lit up. Three mobile games were available to play: Rise and Destroy, AlphaCat, and EverClicker. Since Rise and Destroy is already released, my focus in this post is primarily going to be on AlphaCat and EverClicker. Although, Rise and Destroy is really fun and challenging so definitely give it a try if you haven’t already.

AlphaCat – AlphaCat is currently in beta and only available in Canada. I tried my hand (or paw, rather) at the new game and I have to say it’s pretty addicting! I’m very familiar with matching games, so it was easy to just pick up and play. Out of all 3 games, AlphaCat appeared to get the most attention from people who dropped by, closely followed by EverClicker. I think the familiarity and simpleness of the game will make it very popular. I would play it again!

EverClicker – Now this game was the one I was extremely eager to try! Clever players on Twitter were actually able to find the website and trailer shortly after the poster surfaced in the booth photo from KingsIsle’s Twitter account. I’ll try to explain the gameplay as best as I can. Your character will move forward on their own along the level’s path. After a little bit of walking, you will encounter a monster. To defeat a monster, you have to click/tap repeatedly on it until its health drops to zero. There will be a bar showing the creature’s health at all times. Every 5 levels or so, you’ll encounter a boss. The boss has significantly higher health than the other monsters do and you have to defeat it in a certain amount of time. The boss I faced I had to defeat in 30 seconds. Despite the fact that slicing away at monsters was very energizing, I did start to feel a tiny bit guilty. The monsters that you battle don’t fight back. In addition, many of the creatures that you face come from the realm of Wizard101. During my EverClicker adventures, I encountered Gnomes, Basilisks, and my boss looked like Moros (or very similar). Because they didn’t fight back, I felt a little bad that I was slaughtering my wizard pals, especially the Basilisks. I’m so sorry Basilisks … myth love forever. One of the main goals in the game is to reach a point where you don’t even have to click/tap on the enemy anymore. When you reach a certain point, your character will be so powerful that they’ll defeat the monsters on their own without you having to do anything. This actually did happen between everyone playing the game all day. Sometimes I would look over and the character would just be slaying creatures left and right with nobody at the tablet, lol. However, for boss fights, you will always have to click/tap your way to success. To help you on your journey, you’ll have powers available to you. If I remember correctly, each power has a cooldown so you can’t use them again right away. Also, the levels won’t switch automatically. When you unlock a new level, you’ll get a popup saying that you can now move on, but you have to manually click the next level. I remember I was playing level 3 for what seemed like forever and was wondering why level 4 never unlocked. It turned out that I did unlock it, but I neglected to push the 4 in the top right corner of my screen. Don’t be me – remember to switch the level! Overall, the game is very simple and easy, but it also could get a bit repetitive. My arm was getting tired after awhile because of all that clicking! The game was very popular at the booth and many people got really into it! I was playing with one hand, but this one kid I saw was using both hands like chopsticks and doing some rapid fire slaying! It was amazing to watch. Because of the fact that the enemies don’t fight back, I predict the game may receive very polarized reactions. Some people will like that, and I think some other people will hate that. Either way, I’m eager to see what the rest of you think when it launches!

(Yet another picture I stole from Tom’s twitter. The picture I have didn’t have Tom’s in it.)

Tom and I painted some figurines at the end of the day on Friday. His came about 100 times better than mine. I was going for a really hardcore evil knight, but … well I tried.

It was a really jam packed weekend for me, but I thoroughly enjoyed it. I want to give a big shoutout to Melissa Ghostsinger who is so so sweet. It was a pleasure meeting you at the event! I also want to give a big thanks to everyone I met who mentioned that they read my blog. You all ROCK and thanks so much for the support! And of course, thanks to KingsIsle for making the experience wonderful and welcoming me in with open arms. I’d definitely go to the SXSW Gaming Expo again and recommend others go too. SXSW is such a huge event, you won’t be disappointed!