Inside My Crystal Ball

Animal Cove got a brand new update. Players can now complete 100 new levels and continue the very mysterious storyline. Having finished the new update, I’m ready to recap everything that’s happened since my last summary post. If you’re new to this post series, you can catch up with the links below:

Last you left off, you found a chilling discovery in the old groundskeeper’s journal. Despite that, Winston still wanted to press on towards the Food Court …

As soon as you enter the Food Court, you spot a glass ball lying on a small table. Dez dismisses it as gaudy, and soon your attention shifts toward preparing the Food Court for the alligator’s arrival. While rolling some old food carts away, you notice a bullseye attached to one of them. It has arrows in it too. Considering that none of the animals you know of have shown an interest in archery, Winston thinks it’s possible that there’s someone else on the island. As usual, Dez is quick to deny that idea. He thinks the people in the old park used the carts as target practice. Although that theory is possible, the bullseye isn’t the only odd discovery you’ll make. 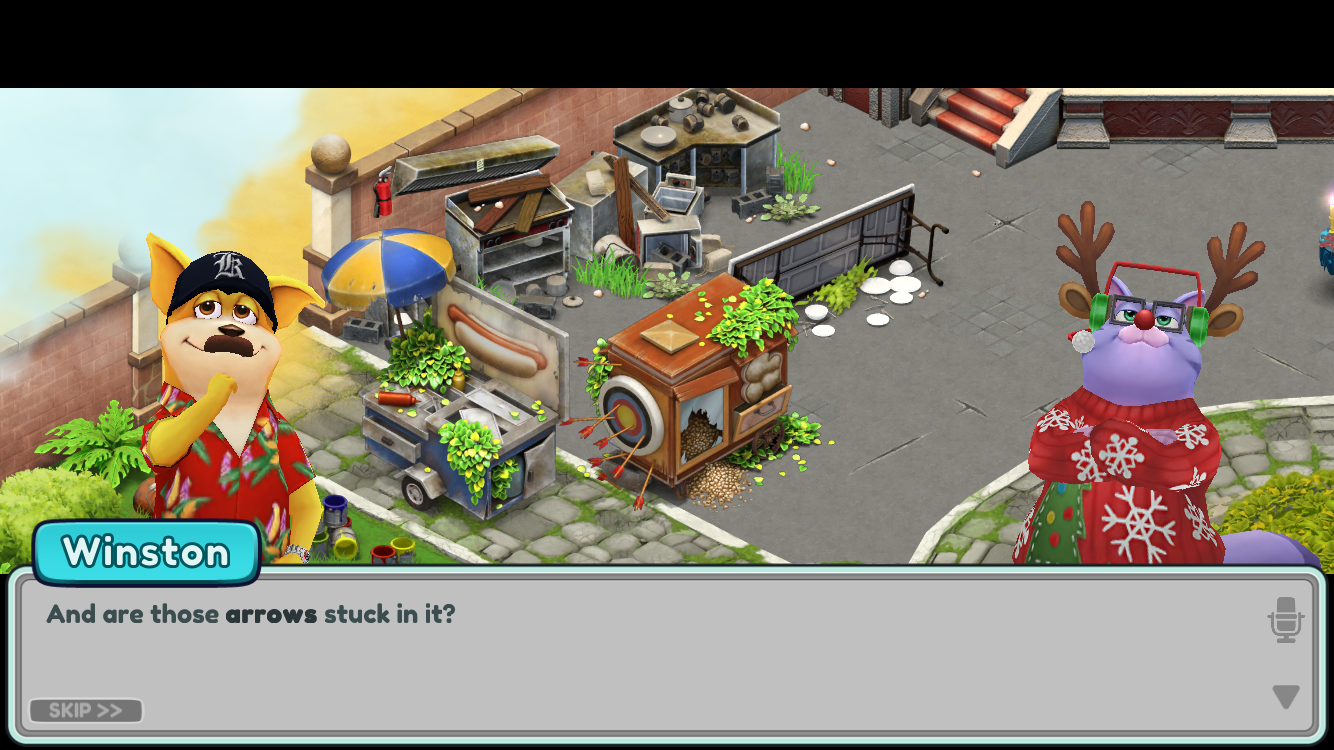 You also find a very interesting flier while cleaning up an overgrowth. It pictures a crystal ball with the words “The Spiral’s Eye.” Winston thinks it looks like the glass ball you saw on the table earlier and urges you to investigate. Upon closer inspection, the crystal ball appears to be filled with some sort of smoke. Through that smoke … Winston can see worlds. Frightened by this revelation, Dez acts like he wants to see the worlds too. Instead, he picks up the crystal ball and dropkicks it into a fountain of toxic sludge. He claims it “slipped,” but Winston knows better. This isn’t the first time Dez has wanted to keep the island’s mysteries a secret, and Winston wants answers. Unfortunately, the confrontation doesn’t end well and Dez goes back to his couch.

With the Food Court finally cleaned up, Elias delivers the alligator to the island. The reptile introduces himself as Boudreaux, and he’s a baker from Louisiana! While Harper prepares a kitchen for the baking alligator, Winston calls Dez to apologize and convince him to order a sump pump. If you had a sump pump, you could drain that toxic sludge and retrieve the crystal ball. Although he appreciates the apology, Dez isn’t interested in helping you and Winston drain the sludge. Instead, he keeps coming up with excuses as to why getting a sump pump would be impossible. If you want to get that crystal ball back, you’ll need to do it yourself – starting with investigating the table it was sitting on. 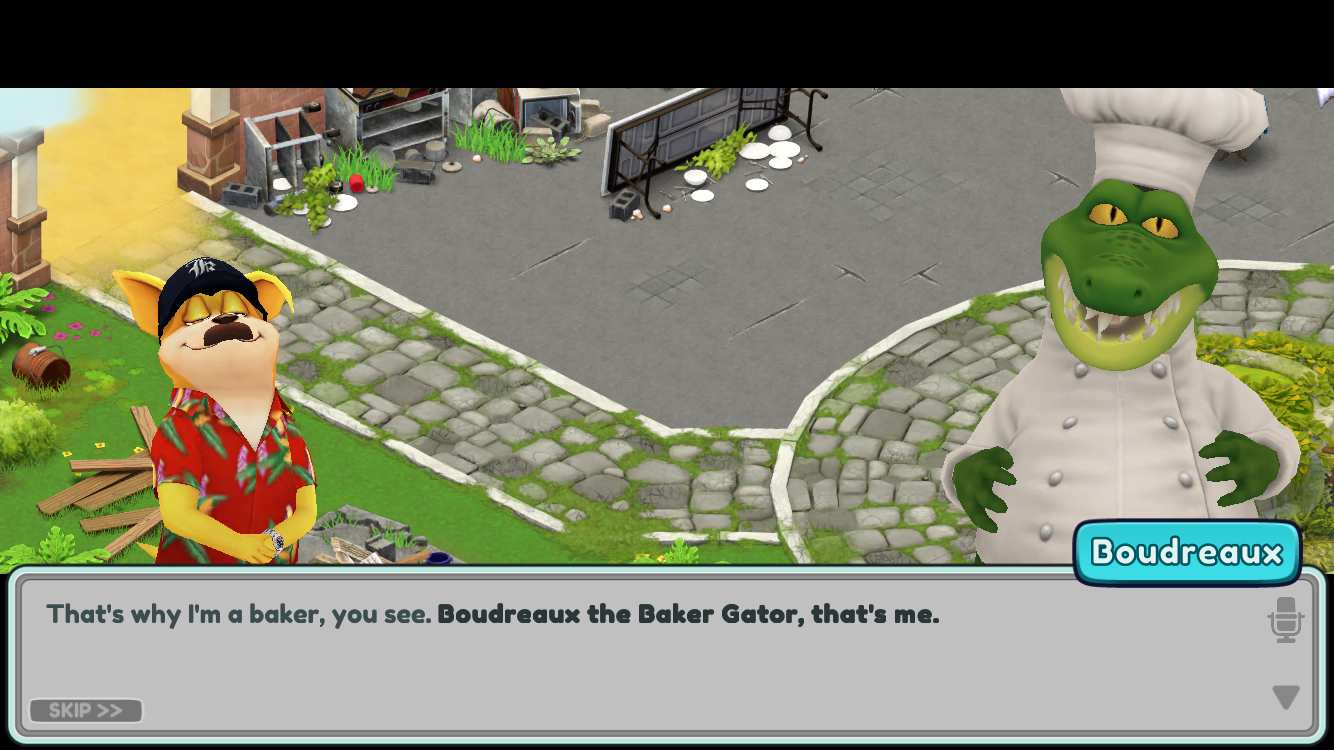 The table itself is pretty ordinary, but there seems to be a strange hint of something in the air. Winston then discovers gas … the same type of gas that the island’s volcano gives off. Odd. While you were doing that, Harper finished Boudreaux’s kitchen and he’s just about ready to serve up some treats for the island’s residents. All he needs is a gas line for his oven. Unfortunately, the only gas available is that mysterious volcanic gas you ran into earlier. Looks like that’ll have to do. Harper successfully creates the gas line, but the island reacts. The volcano starts shaking, but it stops almost as soon as it starts.

With his kitchen fully functional, Boudreaux decides to whip up some Louisiana carrot cupcakes. You’re about to dig in when Boudreaux notices the icing on the cupcakes is smudged. Unhappy with the cupcakes’ imperfection, your gator friend suggests tossing them out. That’s when you hear a voice you don’t recognize. It says “Awww, couldn’t you at least use them for takeout?” You look around, but don’t see anyone else in the area. Even stranger is that all of the cupcakes are now gone! Who could have stolen them right from under your nose? 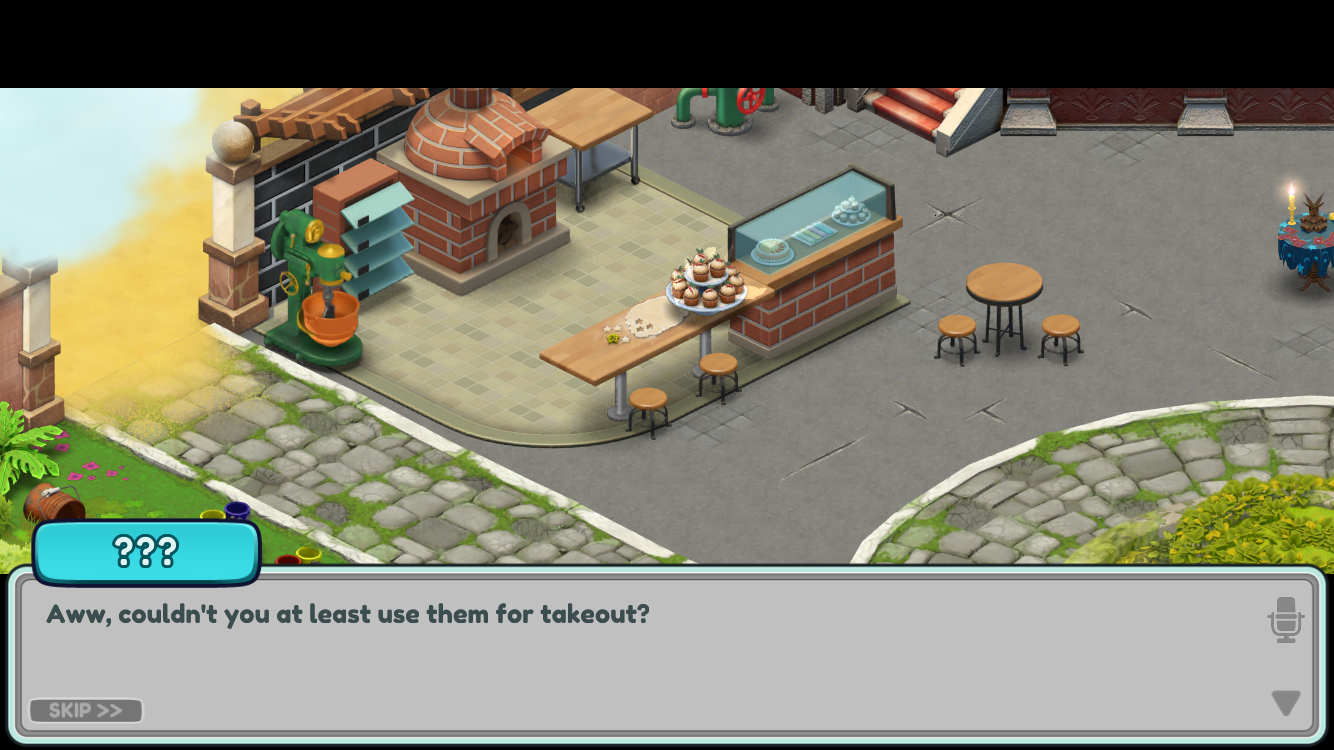 Winston and Boudreaux are split on where to investigate. While Boudreaux goes to the backyard to check out the voice you heard, Winston follows a new scent that he believes might lead to the cupcake thief. Sadly, Winston’s trail goes cold and it’s clear that whoever the scent belonged to traveled deeper into the park. Oddly enough, Winstons seems to vaguely recognize the fragrance. He says it reminds him of his days in Paris – he actually met a lady there once. Knowing that Dez has ventured further into the park before, Winston suggests that you ask him what he knows. As expected, Dez denies everything. He not only says that there’s nothing and no one else on the island, but he also says that he’s the one who stole the cupcakes. You and Winston simply don’t buy it.

In the backyard, Boudreaux stumbles onto a rabbit. She introduces herself as Bunny, and while she smelled the cupcakes from earlier, she claims she didn’t steal them. Bunny has an interesting talent – she’s super fast. She can get from one place to another in the blink of an eye. However, she’s more interested in learning a completely new talent. Bunny wants to be a chef. As Harper gets Bunny situated, Winston questions how your new rabbit friend found her way to the island. Bunny says she burrowed her way here after hearing all the amazing things about the island. 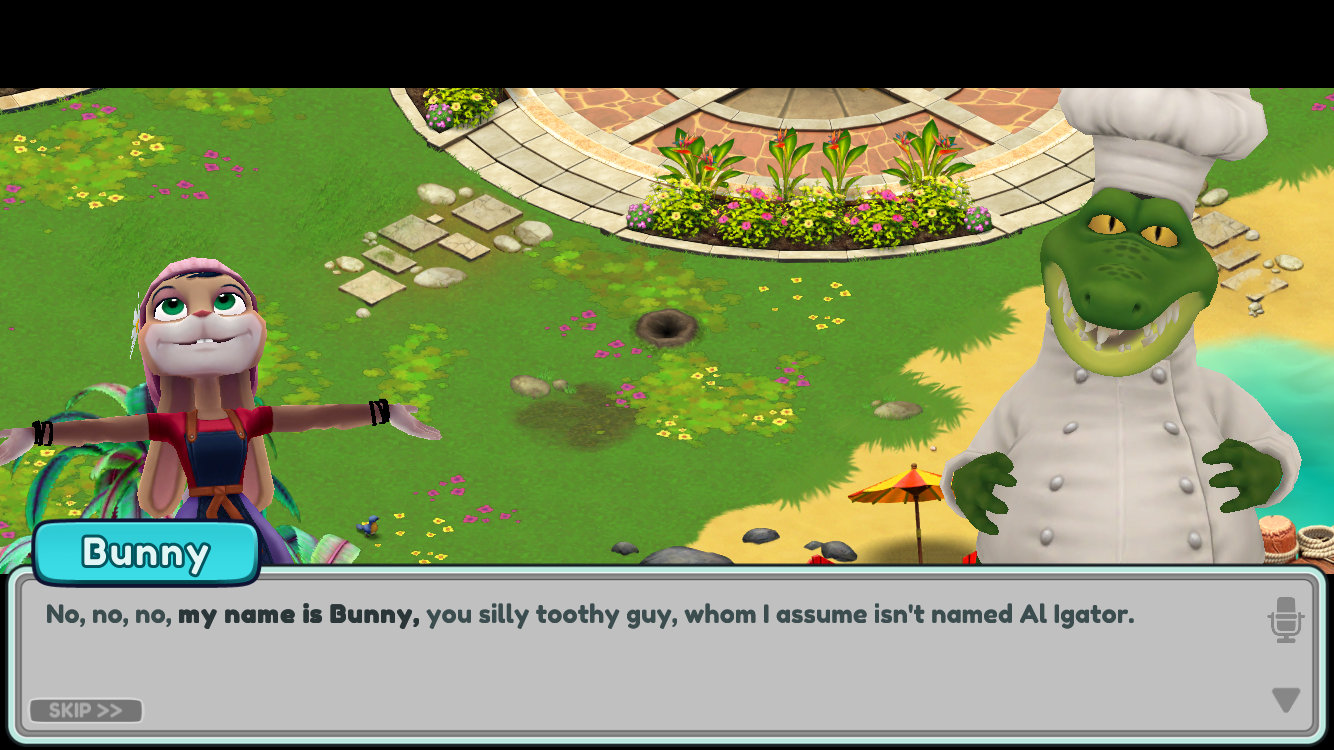 You inform Elias about Bunny’s arrival, and it seems he actually had something to do with it. Elias shares that he developed “telepathic popups” that tell special animals about the island. Winston had thought that maybe Elias had sent another animal to the island without telling you, but apparently, he hasn’t sent a new one since the gator. That confirms that the cupcake thief definitely isn’t one of Elias’s animals. Well, assuming that it indeed wasn’t Dez.

Elias thinks it’s about time that he personally check up on the operation. He’s going to visit the island, and that means you have to prepare! Bunny starts building a kitchen and garden while you and Winston clean up the stage for Elias’s presentation. The stage is littered with old stage props, and a diving suit is one of them. Winston thinks you can use it to retrieve the crystal ball from the toxic sludge. You also find more of that strange volcanic gas coming from beneath the stage. Time for Harper to take a look. 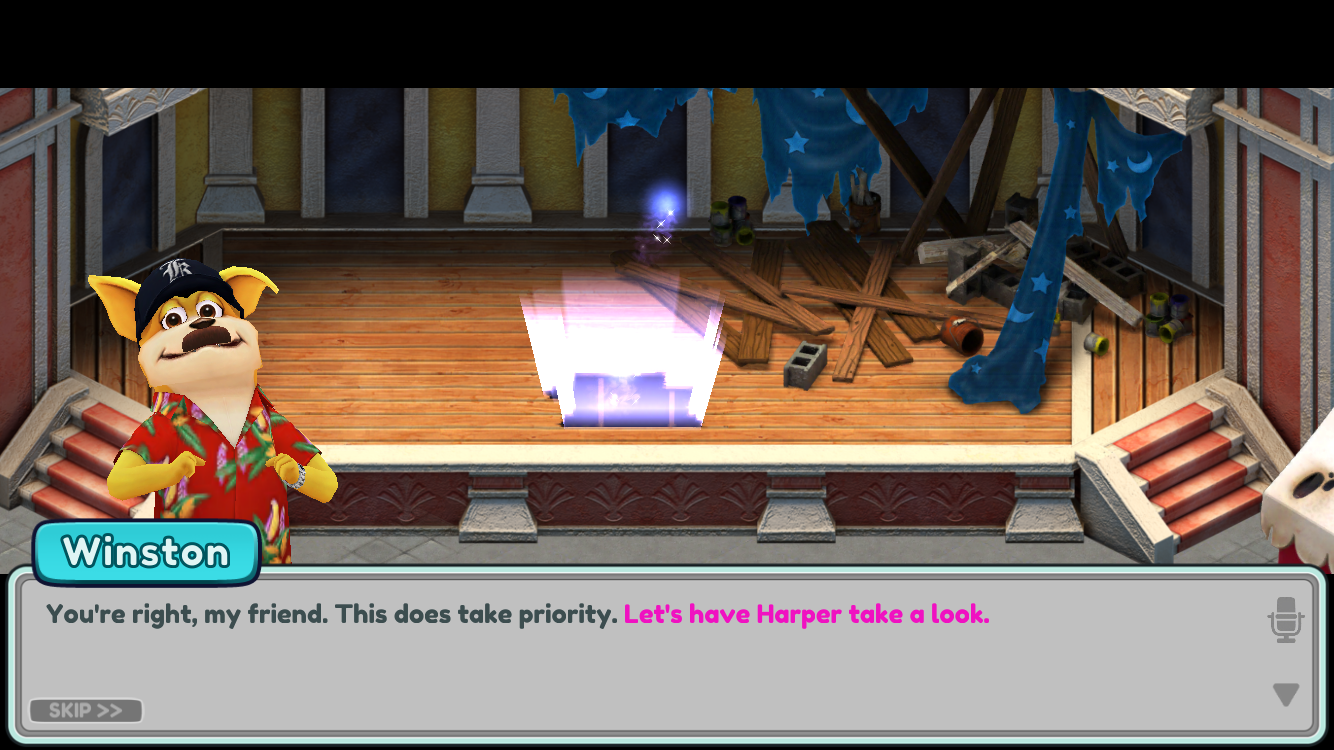 Harper contains the gas and repairs the stage, but she shares some interesting information. That gas fissure was probably always there, so the old park owners KNOWINGLY built the stage on top of it. That can’t be a coincidence. After putting on his diving suit, Winston jumps into the toxic fountain, drains it, and recovers the crystal ball. Sadly, it’s not working anymore. Winston can’t see the worlds he saw before … or anything at all.

With Elias’s island visit nearing, Winston invites Adonis, Amanda, and Dez to help with the cleanup effort. Winston and Adonis (but mostly Winston) clean the fountain, Bunny makes a centerpiece, and Harper makes a dinner table. Amanda redecorates the stage, but in the process, she came across some old posters of a magician. According to her, he looked pretty scary. 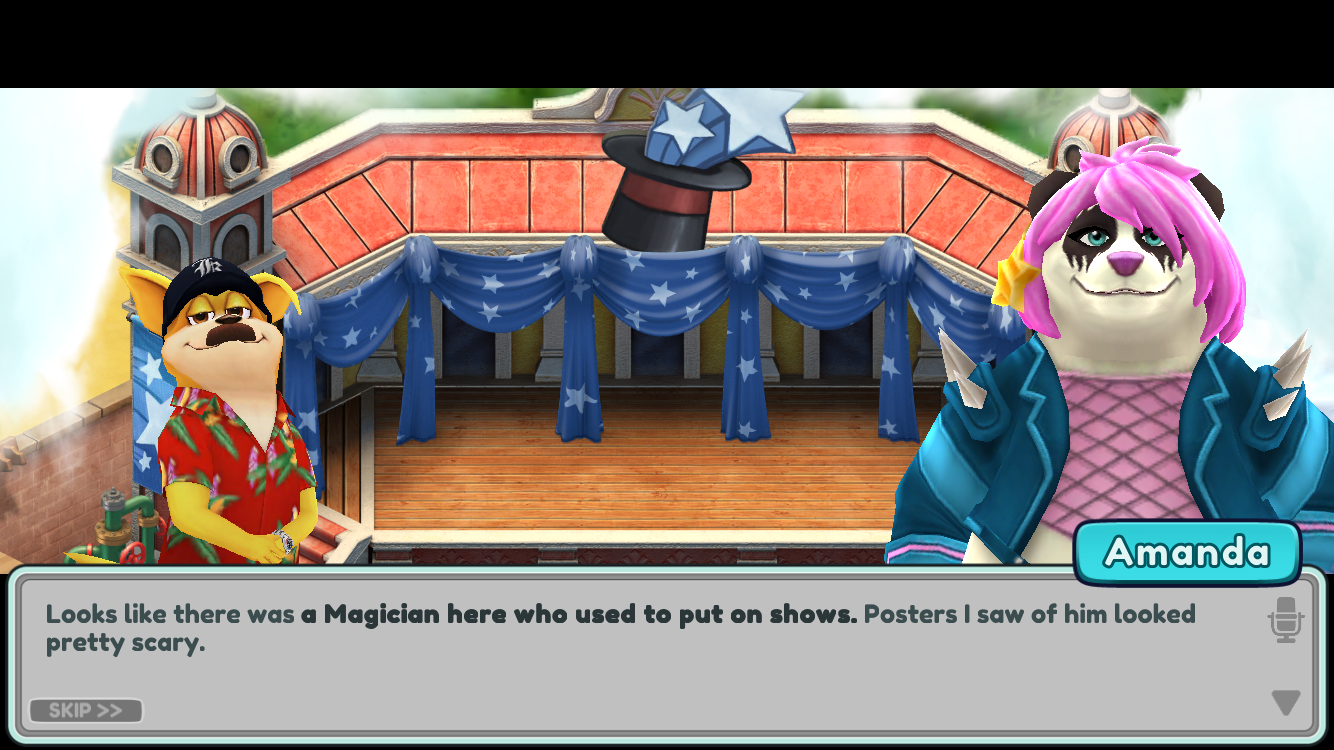 While waiting for Elias to arrive, your animal friends decide to sample a few of the dishes. Different palates cause quite the culinary disagreement and it’s clear you need to calm everyone down before Elias joins you. Needing a dramatic distraction, you suggest turning on the volcanic gas pipe. The gas, the stage, the crystal ball, the magician … they’re all connected. The gas must fuel the crystal ball! It also must have been the key behind the magician’s act all those years ago.

Winston turns on the volcanic gas pipe and the crystal ball activates. You see worlds … they’re in what looks like a spiral. You then see a bloodshot eye. It looks like it belongs to a man – a very scary man. He says, “What now? Oh, you’re not who I expected. But I know you. And when the time is right, I’ll be coming for you.” Uh oh. Elias arrived just in time to see the shadowy figure and everyone’s shock. Sensing that there’s a lot going on, Elias makes his introduction brief. He welcomes the animals and tells you to call him back when the food is done. What? But, the food is already on the table … or so you thought. Looks like the food thief struck again. All the food that was on the table is now gone. Seeing as how everybody (that you know of) was present at the dinner table, you know it wasn’t any of your crew. This event confirms that you and your friends truly aren’t alone on the island. 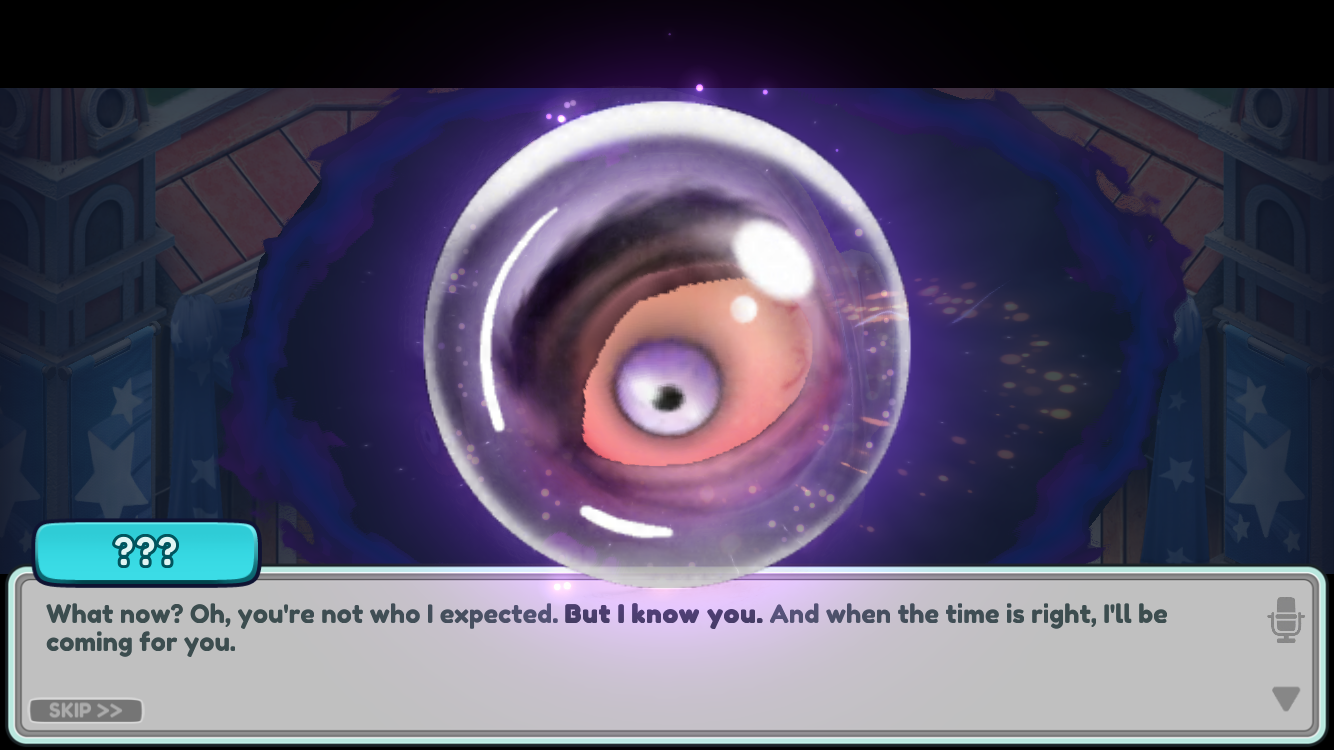 Now who could that be …